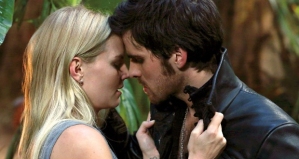 Happy endings aren’t always what we think they will be…

From the fairytales of old to today’s most popular Young Adult novels, there’s a recurring theme when it comes to the idea of happy endings: The happiest ending imaginable is one you share with your first love. No other kind of relationship is romanticized the way first love is romanticized. We’re taught over and over again that there’s no love as great as first love; you’ll never love again like you did the first time, when you were innocent and open and full of hope.

Once Upon a Time is a television show that revolves around the idea of happy endings—what they are, who they’re meant for, and if they’re even possible. Throughout the course of the show’s first three seasons, it’s challenged many basic fairytale tropes—the damsel in distress, the irredeemable villain, etc.—but for a long time it still relied on a very basic piece of classic fairytale mythology: First love is the love all the stories get written about.

For as far as we know (and it would be shocking to find out this isn’t the case), Snow White and Prince Charming are both each other’s first loves and true loves. Their love has grown and matured as they have; it’s been (quite literally) tested by fire and strengthened by shared experiences of joy and loss. Snow and Charming represent the kind of first love that lasts because it didn’t begin with rose-colored glasses or idealized notions of who the other was. But the fact still remains that they—to the best of everyone’s knowledge—have never loved anyone else. And while that’s beautiful, it’s not always relatable.

If there’s one character who grounds Once Upon a Time in the real and relatable, it’s Emma Swan. In Season Three’s “The Heart of the Truest Believer,” Emma told her parents, “My experiences are different.” And one of the biggest differences is how Emma and her parents experienced first love. For Snow and Charming, their first love is their only love, and that’s all they know. But Emma’s first love didn’t end in happily ever after; it didn’t survive every test it faced like her parents’ love has. Emma looked at her parents and saw the kind of love she believed wasn’t meant for her—because she was the savior, because she wasn’t born in a fairytale world, and because her first experience with love left her afraid to let someone get too close again.

Season Two’s “Tallahassee” featured a young Emma who was genuinely happy, unguarded, and as hopeful as a girl who grew up the way she did could be. Emma and Neal’s relationship throughout most of that episode showed the way first love can light up a young person’s life like nothing they’ve ever experienced before and like nothing they’ll ever experience again. However, it also showed that first love can go wrong. Sometimes it doesn’t lead to the happy ending it feels like it’s heading towards.

If love—especially first love—ends for whatever reason it may end, that shouldn’t mean you lose your chance at ever finding something as good or even better again. That lesson is at the heart of a story that developed steadily throughout the course of Once Upon a Time’s third season: the relationship between Emma and Hook.

Emma and Hook are kindred spirits, two people who have been broken by the loss of love in their lives, and they recognized that in each other early on. They both know how painful love can be when it doesn’t work out. And instead of lessening the power of their love story, the fact that both have loved and lost before is represented as something that makes their ultimate choice to open their hearts to each other even more powerful.

Emma and Hook don’t view each other’s past heartbreaks with pity; they view them with understanding. When Emma told Hook that she had her heart broken by Walsh, he told her something essential to both of their individual character arcs and the arc their relationship has taken:

If it can be broken, it means it still works.

A broken heart—like Hook experienced after losing Milah and Emma experienced after losing Neal, Graham, and Walsh—isn’t the end of a person’s journey to finding lasting love. Instead, it’s a reminder of the fact that you have a heart that’s still capable of loving even after everything it’s been put through. It didn’t make Hook happy to know Emma experienced a broken heart again, but it did make him happy to know she was able to love again—even if it was with someone other than him. Because a broken heart doesn’t mean you’re irreparably broken as a person; it means there’s still hope, because you’re letting yourself feel—even if what you’re feeling sucks (to paraphrase Emma).

A common downfall of stories about loving again after a broken heart is the erasure of the past—saying things like “I never really loved someone before you.” That turns a second chance at love into its own kind of first love—because we’re so conditioned to believe the best kind of love is first love. But neither Hook nor Emma ever tried to downplay what they felt for Milah and Neal, respectively, and they never asked the other to do that, either. Hook may have told Emma in the Echo Caves that she showed him he could move on from the pain loving Milah had caused him, but he still very affectionately referred to her as “my first love, my Milah.”

And Emma’s relationship with Neal was treated as the formative, important love that first loves often are. In the Echo Caves, Emma also reflected on her first love when she told Neal, “I love you. I probably always will.” You never forget your first love, and that’s okay. But that doesn’t mean you have to always be with them. There’s a balance that needs to be found between respecting the love you once had and will always have and respecting yourself enough to know when there’s just too much pain between you to go back to someone who hurt you.

In Season Three’s “Quiet Minds,” Emma and Neal both seemed to have found that balance. Neal accepted that he and Emma might not be able to love each other the way they once did. And Emma accepted that, although there was heartbreak in their love story, there was some happiness, too:

Neal: I just want you to be happy—even if it’s not with me.
Emma: We were happy—once.

That respect for young, first, formative love while admitting that it might not be the only path to lasting happiness is a very real and refreshing change from most love stories, which either try to negate happiness in the past in favor of the future or romanticize the idea of never being truly happy with anyone but your first love.

First love is something often depicted as a force of nature; something we don’t choose; something we fall into without looking. It’s a kind of love given without hesitation because it’s often propelled by the invincibility of youth. However, in Emma and Hook, we’re given romantic leads who aren’t wide-eyed kids or adults who’ve never really loved before. Instead, we’re given a man who was driven to darkness and self-loathing because he lost his first love and a woman who was unable to believe anyone could love her after her first love left. We were shown all of that—not just told about it in passing. And by seeing just how damaged losing their first loves made Emma and Hook, we’re able to better appreciate just how monumental it is for them to decide to open their heart to the possibility of loving and being loved again.

In Season Three’s “Going Home,” that’s what made Emma’s “Good” after Hook promised that he wouldn’t go a day without thinking about her so important. It was a decision—a choice—Emma made to accept the possibility that someone could love her enough to think about her every day. And it was also a decision to let Hook know that those thoughts were welcomed and wanted. That one word was all Emma could give, but it was enough to see her even able to give that one word—that one moment of acceptance—after believing herself unworthy of love for so long. It was one word, but it was a huge moment for Emma. And Hook smiled in response because he understood what that one word meant—both to her and to him. It meant hope. And we all know that “happy endings always start with hope.”

That same hope was present when Emma and Hook kissed in the Season Three finale. It was a much slower, softer kiss than the one they shared in Neverland, but it made sense for who these characters are and what their arc was about this season. These characters know to be careful with one another; they understand that what’s happening between them is something to be treated gently, because they know how fragile love can be. Emma and Hook aren’t falling in love blindly; they chose to open their hearts to each other with full knowledge of both the pleasure and the pain of love. They know how much love can hurt if it goes wrong, but they’ve helped each other begin to hope that it doesn’t always have to go wrong.

For Emma and Hook, this second chance at love means knowing that you’re giving another person the power to hurt you but completely trusting that they won’t. And that’s what makes this love story so different from what either has experienced before and so relatable for many watching it unfold—it’s a story about two adults who’ve experienced the pain of love as well as the good. And yet they’re still choosing to take that leap of faith with each other. That’s the bravest kind of love there is.

The relationship between Emma and Hook shows that there’s still life after first loves. It’s a relationship that says we can become more than our pasts without erasing those pasts completely. And it’s a relationship that offers hope for people who have loved and lost and are hesitant to open their heart again—hope that you will find love that makes you happy and gives you strength even when you fear it’s not in the cards for you anymore.

And that hope is the kind of stuff happy endings are made of.

53 thoughts on “A New Hope: Emma Swan, Captain Hook, and a Different Kind of Fairytale”