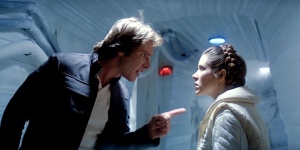 When it comes to fandom, first loves often last a lifetime. The first character you ever really related to, the first “ship” that melted your heart, the first book or movie or TV show that kept you up way past your bedtime just thinking about it—they stay with you forever. And like the best first loves, they change you in ways you probably don’t even realize until years later. They become so wrapped up in the fabric of who you are that you don’t know who you’d be if you hadn’t picked up that book or changed the channel at the right time or popped in that VHS tape—and you don’t ever want to know, either.

For me, it always comes back to Star Wars. I first discovered the original trilogy as a little girl of no more than five or six, thanks to my two older cousins. I have fond memories of pretending to be Princess Leia as I ran around with them on the playground, rushing from the “Death Star” (the jungle gym area) to the “Millennium Falcon” (the swings) as we made our escape from my dad, who was always Darth Vader.

While these early years of Star Wars love gave me my first fictional role model in Princess Leia as well as a certain fondness for scoundrels before I even knew what that word meant, it took until I was 12 for me to really consider myself a Star Wars nerd, complete with the deep sense of engagement, passion, and enthusiasm I attach to the idea of being a nerd. It was the during the spring of seventh grade that I re-discovered the series that had been such a big part of my early childhood, but I now was able to throw myself into it with the single-minded devotion only a preteen girl can possess.

The summer I turned 13 was a summer spent reading Expanded Universe novels, watching my old tape of The Empire Strikes Back probably close to 50 times, and writing diary entries about how much I related to Princess Leia. And then one afternoon, I typed “Han and Leia” into whatever search engine we were using at the time (Did I Ask Jeeves about Star Wars?), and I was introduced to the amazing world of fan zines. All of a sudden, I got to see pictures people drew of Han and Leia. I got to read lists of their favorite lines and moments. And I got to read stories (aka fan fiction) about what happened between Hoth and Bespin, and what happened after the end of Return of the Jedi (Spoiler alert: A lot of kissing. A LOT.)—stories that made me feel a little less alone for having a folder filled with my own scribbled tales of missing moments and character point-of-view pieces.

Thanks to Star Wars, I discovered the world of fan communities, and I knew I was never going to be the same. Because I knew it wasn’t just me who cared as much as I did. I knew there were other people out there who wanted to talk about, create things about, and connect with other people while discussing this fictional universe—and in particular, this fictional couple—who inspired me, too. I wasn’t alone. And that belief that fandom can help all people—but especially young people—feel less alone in the world has stayed with me for the last 14 years.

That’s not the only thing about Star Wars that’s stayed with me for over half my life. I wrote my senior thesis in college on the innocence of the American hero, and Luke Skywalker never left my mind as I tackled that project. I love getting lost in fictional universes with detailed world-building, and before there was Hogwarts or Westeros, there was a galaxy far, far away.

When you look at my list of favorite fictional characters, the vast majority are determined female leaders who fight for what they believe in with everything they have and are never afraid to speak their mind. Who does that sound like? There’s a little bit (or a lot) of Princess Leia in all of them—from Leslie Knope, Peggy Carter, and Kate Beckett to Elizabeth Jennngs, Hermione Granger, and Emma Swan.

And when you look at my favorite fictional relationships, nearly every one of them reflects some part of Leia and Han’s dynamic. Yes, a few of them directly conform to the “princess and pirate” trope, but there’s so much more to Leia and Han than those roles. Their relationship was one between a man who’d been drifting along without a real purpose and a woman who is defined by her devotion to the things she cares about. Along the way, she inspires him to fight alongside her, showing him what it means to be a part of something bigger than himself. And he believes in her and inspires her to believe she can be happy and loved. Their relationship is one of mutual support, partnership, and respect—even when they’re pushing each other’s buttons. Parts of that dynamic can be seen in so many relationships that are close to my heart: Rick Castle and Kate Beckett, Leslie Knope and Ben Wyatt, Emma Swan and Killian Jones, Hermione Granger and Ron Weasley, Brienne of Tarth and Jaime Lannister…

Some fandoms come and go, but Star Wars is forever. It’s a force (no pun intended) that connects me with my family, my friends, and my fangirl roots. It’s a force that to this day has the power to move me to tears during a Star Wars Weekend at Walt Disney World or a video of a Comic Con panel. It’s a force that drives me to look for new pieces of fan fiction, new fan art, and new fans to connect with 14 years after I found that first zine. And it’s a force that has me waiting with bated breath for the next chapter of my journey with this saga to begin when The Force Awakens opens in December.

26 thoughts on “Fangirl Thursday: You Never Forget Your First”