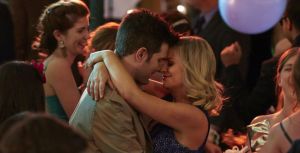 We’ve all seen those lists popping up on our Facebook feeds—“15 Movies that Changed My Life,” “10 Books that Stayed with Me,” “10 Albums that Have Defined My Life,” etc. We’ve probably even made one or more of those lists ourselves. (I’ve done both the book and movies ones.) But I haven’t seen any of these “challenges” devoted to television.

That’s about to change.

I am the woman I am in no small part due to the movies I’ve watched and the books I’ve read in my 26 years. However, I’m also the woman I am because of the TV shows I’ve watched and the television characters I’ve loved. More than any other form of media, television has given me characters and stories to grow up with, to be inspired by, and to learn from over the course of many years.

Therefore, today I’m making a list of the 10 TV shows that have had the deepest impact on me. And I’m challenging all of my fellow nerds to make their own lists and post them in the comments!

1. Sesame Street: My love for television as a medium and my respect for it as a positive force in people’s lives can be traced back to mornings spent watching Sesame Street with my mom. It was the first TV show I was ever exposed to, and I want it to be the first TV show I expose my own children to someday. I love Sesame Street not only for the things it taught me (Spanish, letters and numbers, the continents…) but also for how happy it made me as kid and still makes me as an adult every time I see Grover or Big Bird or Cookie Monster spreading joy to a new generation of kids.

2. Boy Meets World: This was the first show to teach me that a piece of media can mean different things to you at different times in your life. I grew up with these characters not only when the show first aired but also through reruns that seemed to air just when I needed them in high school, in college, and even now. Boy Meets World’s series finale is one I treasure as an adult far more than I did as a preteen watching it for the first time, and it gave me some of the most profound advice any TV show could ever hope to give: “Dream. Try. Do good.”

3. Alias: Everything always comes back to Alias for me as a TV fan. It was the first “grownup” show I watched without my parents; it introduced me to the world of online television fandom; and it gave me my first real television role model in Sydney Bristow—whose warmth and courage of conviction played no small role in helping me through my teenage years. And although Alias was the first to teach me that sometimes your favorite shows can disappoint you (and that even shows you love shouldn’t last forever), I’m not sure any show I’ve ever watched will hold the kind of power over me that this did back in its heyday.

4. LOST: If there’s one lasting lesson being a LOST fan taught me, it’s this: The characters are the most important thing about a television show. And that’s informed the way I’ve watched and written about television ever since. LOST taught me about the importance of people, the importance of the connections we form with one another. That’s ultimately what matters—on television and in life. LOST’s series finale showed that sometimes you have to move on, which was an important lesson for me as a young woman who graduated from college the day before that finale aired.

5. So You Think You Can Dance: If there’s one word for how SYTYCD makes me feel, it’s proud. I’ve been a dancer since I was a little girl, and this show took what I’ve loved to do for my whole life and showed America exactly what makes it so special. It shows the beauty, pain, and strength of dancers, but it also shows our incredible capacity for joy and friendship. Dance means the world to me, so this show that brought my passion to the world at large means the world to me, too.

6. The Office: Part of the reason The Office made this list is because it was the first show I ever binge-watched, so it opened up a whole new way of consuming media for me. However, this show’s lasting impact on me will always be rooted in Jim and Pam. This wasn’t a fairytale or an epic love story, but that made it even more special. It was a story about an ordinary man who loved an ordinary girl with a beauty that was anything but ordinary—and is still something so many of us hope to find in our own lives.

7. Chuck: Is it weird that whenever someone asks for a description of my ideal guy, my first instinct is just to say “Chuck Bartowski?” Chuck helped me see how attractive nerds are, which helped me learn to love my own nerdy side again. Loving the character of Chuck Bartowski helped me to see that there’s nothing I want more in a future significant other than someone who loves with their whole heart and has no understanding of the concept of apathy. Give me a big-hearted nerd like Chuck, or give me nothing.

8. Castle: This show is the reason this website exists. Castle was the first show I wrote episodic reviews of, and it was the first show to inspire me to deeply analyze television. More than anything, though, Castle inspired me to really take charge of my own life at a time when my self-esteem hit a rough patch and I felt like I was struggling to be happy. Watching Kate Beckett’s journey—especially through Season Four—inspired me to choose happiness in my own life and to take ownership of my life’s story like she was doing with hers, working to be a better person one day at a time. I’m a stronger, better Katie because Castle exists, and that’s a fact.

9. Parks and Recreation: I’m a Leslie Knope—a bit of a steamroller who feels strongly, cares deeply, and wants to make a difference in people’s lives. And sometimes all you need to learn to love yourself for exactly who you are is to see the traits that you’ve been told are “too intimidating” or “too much” brought to life by a TV character who is loved for being strong, ambitious, and passionate. Parks and Rec inspires me every day to be my most positive and most encouraging self—to be my most “Leslie” self. It reflects a belief that there are good people out there in the world and that positivity can be the backbone of a successful life (and TV show).

10. Once Upon a Time: As I got older, I thought maturity and cynicism went hand in hand, so for a long time I suppressed my naturally hopeful nature in an attempt to be more mature. And then I discovered Once Upon a Time. This show opened my eyes to the idea that strength can be found in optimism and hope, which has made me a much happier person. But its most lasting impact on me might be in its message that the bravest thing we can do is open our hearts and believe in others and in ourselves. It’s helped me approach life with a more open and hopeful heart, and I’ll always be thankful for that.