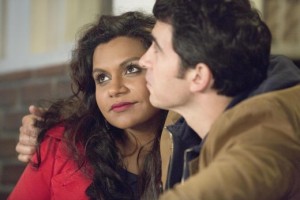 Two-Sentence Summary Mindy and Danny’s long-simmering argument about her chronic lateness comes to a head and leads to some moments of revelation for both of them. Meanwhile, Peter is set up on a surprising blind date.

Favorite Line “I’m giving you the silent treatment, by the way. That’s why I walked right by you and didn’t respond.” (Mindy)

My Thoughts Absence makes the heart grow fonder, or at least that’s how I felt after watching “Caramel Princess Time.” The last couple of episodes of The Mindy Project before the show’s little hiatus weren’t my favorites, but I thought “Caramel Princess Time” was the show’s way of coming back strong. This episode was firing on all cylinders: Its B-plot was solid, its humor wasn’t just one-note, and its handling of another Mindy/Danny conflict felt very true to these characters while still managing to surprise me in a very good way.

Let’s start from the outside and work our way to the episode’s caramel center. (I know, I know…Lame pun is lame.) I would like Allison Tolman’s Abby to stick around for as long as possible. I didn’t watch Fargo, so I had no preconceived ideas about her, but I loved her instantly. The self-confidence and sense of self-respect that she brought to Abby are such perfect counterpoints to Peter’s insecurity and immaturity. Tolman and Adam Pally had a very natural chemistry in that final writing group scene, too, and I’d like to see more of that. I’d also like to read more of Peter’s fiction because there was too much perfection in “A Titanic Mistake: A Sunken Romance” for me to outline properly in this post. (Although I will make special mention of Peter’s ridiculous “old pirate captain” voice that he gave to the captain of the Titanic.) There was something really adorable about Peter falling for Abby through her writing and wanting to connect with her in her element. But maybe that’s just the writer in me talking.

Peter’s interactions with Abby highlighted an important theme in the episode’s A-plot: Sometimes you have to step outside of your comfort zone in order to leave bad patterns of behavior behind and grow. Peter, Mindy, and Danny all were put in new situations this week, which forced them to examine how they treat the people around them, leading them towards real moments of character growth.

I was incredibly annoyed with Mindy at the start of the episode. Punctuality (especially at a movie or event that requires reservations, like the comedy act) matters. It’s just bad manners to keep people waiting more than a couple of minutes. I was also furious with Mindy for changing Danny’s watch because I knew how upset I’d be if someone changed the time on my phone to purposely make me late for work. It was a very in-character action for Mindy to take, but that didn’t mean I liked it.

All of that annoyance led to happiness when I saw that this was going to be an episode where Mindy actually learned that her self-centered behavior was wrong. And she learned it in the best possible way—with some help from Annette and Dot. It was great to see Rhea Perlman back, and I think Mindy and Annette’s dynamic has become one of the best on the show in only two episodes. I love that these two women keep each other honest. And, in this episode, Annette’s behavior helped Mindy see that she’d been behaving selfishly by constantly being late for things Danny wanted to do. We often see Danny grow and develop, so it’s nice to see Mindy have those moments of becoming a better person and better relationship partner, too.

Just because Mindy experienced a lot of growth and self-awareness in this episode doesn’t mean Danny didn’t, however. That was my favorite thing about it: Both Mindy and Danny ended the episode better people than they were at the start of it. Neither one was a blameless party in their conflict. While Mindy shouldn’t have changed Danny’s watch (or been late all the time), Danny’s “finger gun” reaction was way over-the-top. It was nice to see him actually face consequences for it (which were hilariously related to his behavior in the previous episode—nice continuity, writers!).

The counseling session started out very funny, with Morgan talking about being a cookie addict (Aren’t we all?) and the failed partner exercises between Morgan and Danny. However, the writers decided to go for emotional impact when it came to why Danny was so upset about Mindy being late, and it worked. I love that they know what a gift they have in Chris Messina, and they try to use his talent for giving a moment real depth and resonance wherever possible. Nobody can turn on a dime from hilariously grumpy to heartbreakingly sincere like Messina.

Danny’s confession about his dad never showing up to take him to see Ghostbusters was devastating. It was the kind of memory a kid like Danny would hold onto forever, a wound made when he was young that left one heck of a scar. The writing of that confession was so good; it was achingly specific, which allowed us to believe that Danny replays this memory whenever someone he loves is late to meet him somewhere. No matter how much faith Danny has in his relationship with Mindy, there is still a part of him that fears the day she stops showing up. And that’s so sad but so believable.

It’s also why it was so sweet to see Mindy waiting for Danny on those porch steps where his dad never showed all those years ago. No matter how ridiculous she acts sometimes, she loves him, and she’ll never stop showing up when he needs her. That final scene between them was filled with such unforced sweetness and easy chemistry. Messina and Mindy Kaling have a real handle on how a relationship between these two feels now, and it’s beautiful to watch.

I especially loved the moment when Danny explained that he gets so upset at Mindy because of his dad, and she made a point of telling him she wasn’t going to press him to tell her more. It was an interesting choice to have Danny simply thank her for that and not actually tell her, but I liked it. Danny had just figured out how much of a hold that painful memory still had over him, so it would make sense for him to not feel comfortable sharing right away. Even in the most stable relationships, it takes time to share wounds from our pasts. What was important was that Mindy was true to her word; she didn’t push him for more. She took the openness he was giving her in that moment and appreciated it for what it was instead of asking for more, which was another sign of growth from her.

Ultimately, the best thing about “Caramel Princess Time” was that it was about both parties in a relationship working through a conflict to be better partners and just overall better people. It was another example of The Mindy Project using Mindy and Danny’s relationship as a way to facilitate real growth for these characters. And it was another reminder of why this couple is one of my favorites on television.