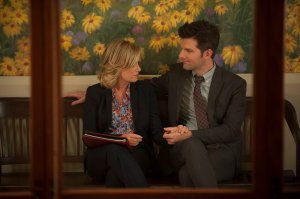 Two-Sentence Summary Leslie’s desire to run for city council again is met with opposition from Ben and her friends, and Ben’s gift for her last day as a city councilwoman helps her see that maybe there are bigger, more fulfilling dreams waiting for her. Tom is also chasing new business dreams with the help of April, Ron, and a very jet-lagged Andy; and Ann and Chris learn the sex of their baby.

Favorite Line “In times of stress or moments of transition, sometimes it can feel like the whole world is closing in on you. When that happens, you should close your eyes, take a deep breath, listen to the people who love you when they give you advice, and remember what really matters.” (Leslie)

My Thoughts Parks and Recreation has aged very gracefully. In 100 episodes, it’s grown from a show about a woman and her job to a show about a woman and the things that are so much more important than her job. It’s grown from a show that felt like the weird kid sister of The Office into a show with its own clear mission statement: Dream big; love bigger. And the way its 100th episode reflected that mission statement as it honored the show’s past and opened up new futures for the characters we love was nothing short of beautiful.

I’ll admit: I haven’t loved this season of Parks and Rec the way I’ve loved other seasons. After the brilliant season premiere, I found most of the other episodes so far to be lacking the warmth and optimism that have come to define this show for me. And I was worried that “Second Chunce” was going to follow that same path until Ben’s gift for Leslie showed up.

My problem with this season so far has been that we’ve had to watch Leslie suffer. We’ve had to watch this character deal with incompetence, ungratefulness, and a whole host of Pawnee citizens who don’t love her the way we all know she deserves to be loved. My favorite season of Parks and Rec—Season Four—was so successful because we were right alongside Leslie in the campaign trenches, rooting for her to win her city council seat not just because we liked her but because we believed she deserved it. But then this season and its recall plot came along, taking away Leslie’s dream job, the dream job we all invested in, too.

“Second Chunce” was an episode about love, which should surprise no one. It was fitting that the 100th episode of a show that features three unique, solid marriages and one couple blissfully heading into parenthood together would be centered around love—love for your dreams, love for your friends, love for your spouse/partner, and even love for yourself. It took a while to get there, but once this episode hit its stride, it filled my heart with the kind of a joy only Parks and Rec can create.

Even while I was still struggling with watching Leslie pursue a goal that would only hurt her again (aka her “second chunce” at being a councilwoman), I found myself laughing at the storylines around her. I loved seeing April try to wake up her jet-lagged husband. Ben’s odd singing telegram request was so wonderfully him. I thought the Shark Tank parody with Tom looking for businesses to invest in was comedic gold. Councilman Dexhart’s press conference was perfect (the “Anthony Weiner” at the end was my favorite part). And the episode featured the best of the best in terms of recurring Pawnee citizens (the “open-minded” Jean-Ralphio, Shauna “I can fix him” Malwae-Tweep, and Perd, who was hilariously missing his microphone).

The only bits that didn’t land with me were Ann’s pregnancy-induced craziness and the whole gender storyline in general. I thought it felt forced in order to give Rashida Jones and Rob Lowe something to do when I would have rather seen Ann helping Leslie through her issues in this episode. And I’m getting a little tired of the incessant cruelty towards Jerry. I know it’s part of how the show works, but it’s been bothering me more and more this season.

And while this episode had plenty of funny moments, I don’t need Parks and Rec to make me laugh really hard; I need it to make me smile really big (and yes, there is a difference). The way this episode achieved that was in showing just how much two of my favorite characters have grown over 100 episodes.

I love Tom Haverford. I love his ridiculous ambition and his confidence in his ability to someday satisfy that ambition. But, like Leslie, Tom had to give up something we proudly watched him achieve. Yes, it broke my heart to see him give up Rent-a-Swag, but that heartbreak was soon replaced by happiness at watching him choose a new path to happiness for himself—one that involves helping others. Tom learned, with some help from April, that sometimes creating your own path is so much better than trying to find the right one to take.

Tom’s new role as business liaison for Pawnee is an excellent reflection of his growth as a character. It’s his way of embracing the major philosophy of this show—“No one achieves anything alone”—by sharing his passion for entrepreneurship with others. There’s nothing more quintessentially “Parks and Rec” than a character using their passions and talents to help other people, and I love that it’s Tom turn to do this now.

Tom’s story was also an excellent parallel to Leslie’s. Both characters are defined by their ambitions, their dreams, and their refusal to give up on those dreams. But in this episode, both characters were faced with a terrifying idea: What happens when your dream gives up on you? Tom chose to find a new dream, but that decision didn’t come so easily for Leslie. It took a visit from Jen Barkley (such a pleasant surprise!) to wake Leslie up to the idea that maybe the problem wasn’t that she wasn’t good enough for her dream job; it was that her dream job wasn’t good enough for her.

“Dream bigger.” With two words, Jen Barkley reminded Leslie—and the audience—that sometimes we shouldn’t beat a dead horse when it comes to failure. Sometimes we have to open our minds to possibilities outside of the life we’re used to living. Sometimes we can get so bogged down trying to make a “dream job” work because we feel we’re supposed to that we forget there are always other dreams—bigger dreams—waiting for us, if we just expand our horizons just a little further. Leslie has always been defined by her ambitions, so it thrilled me to see another powerful, ambitious woman (who is so unlike Leslie in the most entertaining of ways) remind Leslie of her worth and her potential.

But Leslie didn’t end the episode chasing a bigger political dream—at least not yet. Instead, she ended it with a trip to Paris with her husband, a reflection of how far she has come in 100 episodes. Leslie may not be loved by most of Pawnee, but she is loved by Ben—and that’s enough for her now. There’s a balance to Leslie’s character now that didn’t always exist, a maturity that has deepened and grown in a way that has snuck up on me as a viewer quite beautifully.

Leslie Knope has always been known for two things: her passion and her optimism. And with Ben she has found not only an outlet for those two things but an outlet that loves her as much as he loves him. This episode showed us that Pawnee might not be enough for Leslie anymore, but that’s okay. Because Leslie doesn’t need its love the way she did before she met Ben. With his support and his encouragement, Leslie can find the courage to dream bigger. And she can also find the moments where she doesn’t have to dream to be happy—because she can simply be content with her husband and the life they’ve built together. The end of this episode showed us that this ambitious woman has grown to achieve something even more important than a seat on a city council: real happiness and love.

It sounds cheesy, and it is. But it’s also the foundation upon which Parks and Rec has been built for the last 100 episodes: It’s not a bad thing to be happy and to want others to be happy. And for Leslie Knope, happiness is finding someone who will help her chase her biggest dreams but who will also remind her that sometimes taking a rest from that chase is exactly what she deserves.