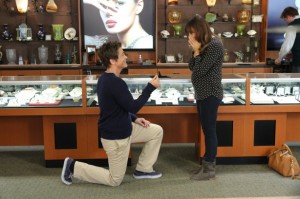 Two-Sentence Summary Leslie returns to the Parks Department and Ben begins his new job as city manager, and they both experience some difficulties adjusting to their roles. Meanwhile, Ann and Chris contemplate how well marriage would fit into their very nontraditional relationship.

My Thoughts Well that was…okay, I guess? Don’t get me wrong; I laughed out loud more than a few times during “New Beginnings” (mainly thanks to Ron and Ben), and I even had my heart sufficiently warmed in the surprising way only Parks and Recreation can (once again, thanks to Ron). However, there was just something off about this episode. “New Beginnings” really felt like the beginning of the end for Parks and Rec, and I was not emotionally prepared to deal with these feelings after a mid-January episode.

When I say “the beginning of the end for Parks and Rec,” I don’t mean in terms of the quality of the show. Did I adore this episode with my usual fervor? Not really. But it was still more entertaining than most of what I see on television, especially comedic television. What I mean is that these last two episodes—this one in particular—seem to be setting the stage for the kinds of huge changes in Leslie’s life that would only work at the end of this show’s run. I know nothing has been announced in terms of the show’s future, but from the time it was stated that Rashida Jones and Rob Lowe were leaving, I couldn’t stop wondering if this would be Parks and Rec’s last season. This new emphasis on Leslie needing to move on to bigger and better things has only intensified that wondering.

“New Beginnings” was an episode all about feeling uncomfortable and the things we do to try to ease that feeling. For Ben, that feeling of discomfort in his new role as city manager made him want to try to fit in with April, Andy, and Donna. For Leslie, feeling uncomfortable and unnecessary back in her old job made her resort to her steamroller, control-freak tendencies. For Chris and Ann, feeling uncomfortable with the idea of marriage (but also with the idea of being unmarried parents) led them to numerous purchases and returns of the same ring. And Jerry tried to ease discomfort caused by choking on a cracker by simply eating another cracker.

It was strange to see Leslie so out-of-place in the Parks Department. First of all, it wasn’t as if she ever really left. I’m pretty sure it was stated that she was splitting her time between the city council and the Parks Department, so I don’t understand why this episode was based around the idea of her suddenly being back at her old job. Her lack of knowledge about Tom’s professional growth and the way the episode was designed to make it seem as if Leslie was returning to the office after a long time away just felt wrong to me. I was supposed to understand what Leslie was feeling, but I couldn’t because her motivation was based on a glaring continuity error, which is so rare for this show. I didn’t commiserate with either Leslie or her coworkers because I hadn’t really felt Leslie’s absence from the Parks Department at all.

Part of my frustration with Leslie’s storyline came from that continuity error, but part of it also came from my intense dislike for any situation that makes Leslie unnecessarily mean. I know some people like that over-the-top, negatively overreacting side of Leslie, but I don’t. I hated watching her try to undercut Tom’s success because it seemed to go against everything she stands for. Yes, her ultimate change of heart was sweet, but we’ve been down this road with Leslie so many times before. There are better uses of Amy Poehler’s Golden Globe-winning talent. (Did you really think I was going to get through this entire post without mentioning that?) The whole point of Leslie Knope as a character is that she can be funny while still being kind and warm, so why do we keep trying to mine comedy out of her acting like a jerk towards her friends when she doesn’t get her way? I can deal with it happening every once in a while, but it’s been the focal point of too many episodes this season.

The saving grace in Leslie’s storyline in this episode was Ron. His fear of Leslie finding his secret stash of bacon (hidden in the ceiling) was hilarious, but nothing could top the perfection of his destruction of his “Employee of the Month” award. That closing montage took everything we know about Ron Swanson and used it to its fullest comedic effect. Somehow, each cut gave way to a more outlandish and yet even more wonderful method of destruction.

It’s actually a really wonderful message, but it still leaves me feeling unsure about the direction of the show. If Leslie is moving on beyond Pawnee and onto bigger things, does that mean we will see much less of the Parks Department? (This episode seemed to imply that.) And, if so, how can the show survive? It feels like a setup for a series finale rather than just another arc, which just brings me back to that place of depression because I’m not ready to say goodbye yet.

Speaking of saying goodbye, does anyone else feel like Lowe and Jones’s final run of episodes has been very strange? I wonder if it’s because of scheduling conflicts, but it’s annoying that they’ve been so isolated from the rest of the cast. It’s breaking my heart to watch each episode go by without a scene between Ann and Leslie (especially in episodes where major life choices are being made for both characters). And separating Chris and Ann from the rest of the show’s action has been making their storylines drag. Their plot this week felt like a waste of time that could have been better spent interacting with other characters or even doing something genuinely funny on their own (like Chris taking Ann to prenatal yoga or something like that). I’m feeling less and less invested in their departure when I know it should be the opposite.

I used to hate when Ben was separated from Leslie like I hate Ann and Chris being separated from the main cast. But now Ben’s side plots are often my favorites. Adam Scott is just so consistently funny, and putting him with the always-excellent Retta, Chris Pratt, and Aubrey Plaza is a move that can’t ever go wrong. Like Leslie, I think Ben’s plot was meant to open the door for him leaving the city manager position when the time comes (because it’s not a job he’s comfortable with). But unlike Leslie’s storyline in this episode, this plot made perfect use of its central character’s strengths. Panicked Ben is so much fun to watch, and this episode gave us two perfect variations of it: in the police station and again when he realized the prank he planned was completely insane. I can’t decide which was funnier: the forced way Ben led them down the hallway or the absurdly intricate prank he was going to pull on them (and Donna’s literal “WTF?” reaction). Now that Winston on New Girl seems to have moved beyond his obsession with pulling ridiculously complicated (and dangerous) pranks, it looks like Ben Wyatt now holds the title of “Prank Sinatra.”

Overall, this episode had plenty of moments of laughter (Leslie walking into the lamp, “Urethra Franklin,” Ben and the blood, etc.), but it still left me feeling strangely uneasy about the status of these characters and this show in general. I don’t want to think about Parks and Rec ending because this show is my TV happy place. So if the show really isn’t ending this season, then I don’t like the way this episode felt like a setup for something that isn’t even happening yet. But if it is ending…

I refuse to even acknowledge that possibility right now. (And yes, I do know how much that sounds like something Leslie would say.)