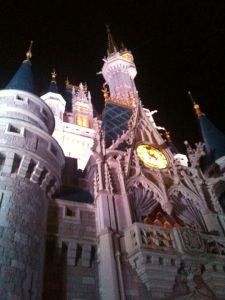 I have a lot of interests, a lot of passions. Some I’ve only developed recently (I’m looking at you, A Song of Ice and Fire), and some have been with me for most of my life (my devotion to books). But a select few have been a part of my life before my earliest memories; they are such an intrinsic part of the fabric of who I am that I can’t separate my identity from their influence—not that I would ever want to.

Walt Disney World is one of those passions.

Having some fun in the new Tangled bathroom area of the Magic Kingdom on my latest Disney World trip.

I’ve been traveling to Disney World with my family since I was a toddler, and it’s beyond just my favorite place on Earth. It’s my happy place. Everyone has one—the place where you feel most like the best version of yourself. Disney World is a place where you’re taught that you’re never too old to hope for happy endings, where the possibility of magic is around every corner. And in the words of the great Rick Castle:

If you don’t believe in even the possibility of magic, you’ll never ever find it.

I found magic in Disney World when I was a little girl, and the beauty of that place is that I still find it more than two decades later. I find magic in everything from the smiles of kids meeting their favorite characters for the first time to the music they play as you exit the park at night. Magic lives in the lobby of every hotel, in the light from each firework, and in the kindness of each Cast Member.

Nerdy Girl Notes was started as a place to celebrate the unironic enthusiasm we all have for the things that mean the most to us. Disney World has always been the best example of something that—no matter how old I get or how cynical the world around me becomes—I will always be unironically enthusiastic about.

I don’t remember a time in my life before I knew what it was like to ride on Dumbo, hug Mickey Mouse, and turn the corner on Main Street to see Cinderella’s Castle in all its glory standing before me. My childhood was filled with memories of character meals, learning Spanish on the monorail, and waiting in line for Peter Pan’s Flight. My adolescence was filled with adventures on Star Tours, first times on Space Mountain and Test Track, and trying all kinds of new foods around World Showcase. And now, as an adult, I still find joy in the little moments—from the first bite of a Disney cupcake to the last drop on Splash Mountain.

I was a Disney kid, and now I’m a Disney kid-at-heart. I believe in happily ever after, the power of wishes, and that a dream can be a dream come true—with just that spark in me and you.

10 thoughts on “Where Magic Lives”