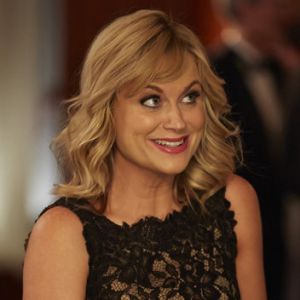 I’m not ready to say goodbye. I know all good things must come to an end, but that doesn’t make it easier to think about tomorrow’s series finale of Parks and Recreation. I’ve spent a long time thinking of the right way to bid farewell to a show that’s meant so much to me, and I decided to approach it (like I approach most things in life) the way you would: with positivity, with optimism, and with appreciation for the power one woman—if she’s the right woman—has to inspire those around her to be their best selves. You might not be real, but the impact you had on me is as real as it gets. So before I say goodbye, I wanted to say thank you.

Thank you, Leslie, for your passion. As we grow, we’re often led to believe that it’s cool to be apathetic; it’s cool not to care, or at least not to show you care. Because openly caring about things asks for a kind of vulnerability and honesty that scares people. So thank you for being brave enough to let the world see how much you care. Thank you for reminding me that a life well-lived is a life lived with passion and intensity. And thank you for never apologizing for feeling as strongly as you felt about the things that mattered to you. Women often feel a need to apologize for their feelings, especially if they’re strong, but you were allowed to own your passion unapologetically. And you were surrounded by characters who supported that passion and were inspired by your ability to care. The depth with which you cared about things was never mocked; it was celebrated, and it made me feel proud to be someone who only knows how to feel things strongly.

Thank you for your warmth when other female characters in your position would have been written as cold. You were as driven and determined a character as I’ve ever seen, but you bucked all the stereotypes the media likes to slap onto their depictions of women who are good at their jobs. There’s an all-too-common saying characters utter when they want to be shown as driven: “I’m not here to make friends.” But you were always there to make friends. And that never stopped you from being great at your job and moving up in the professional world. Ambition and kindness are often thought to be opposing forces, but you were shown to be successful because you appreciated the people around you—not despite that fact. And as a woman who wants to believe you can be driven without being cold and mean, it’s been so rewarding to see a reflection of who I want to be as a leader and professional woman in you.

For a long time, I wondered if “nice” and “strong” were mutually exclusive concepts. Could a woman be taken seriously if she was nice? Could a woman be taken seriously if she was emotional? Could a woman be taken seriously if she wasn’t a cynic by nature? I didn’t know how to marry those parts of my personality to my career ambitions, and then I found Parks and Rec. In you, Leslie, I found a woman who possessed all the traits I worried would make people think I was weak. And I discovered that no one who mattered confused your kindness, optimism, and open heart with weakness. It filled me with pride to see a character who valued the same things I did written as a successful woman and not a pushover. Because of you, I feel like I can be successful in my career without sacrificing who I really am.

For as amazing and inspiring as your strengths were, thank you also for your flaws. Thanks for being a steamroller and a perfectionist who can be too pushy sometimes. Thanks for overreacting and being too dramatic. Thanks for being imperfect. While it’s always nice to see the things you value in yourself reflected in the media, it’s also important to see your shortcomings reflected, too, so you can see an example of how to be a better version of yourself. You were never written to be a perfect character, and that made you all the more relatable.

I find it wonderful that Galentine’s Day seems to be one of your lasting contributions to the cultural landscape. It seems fitting that your celebration of female friendship will continue long after Parks and Rec has ended. You helped me remember how important it is to celebrate the ladies around you, to stop viewing other women as competition and instead see them as the beautiful tropical fish they are. It’s such a rarity for a television show to celebrate female friendship the way Parks and Rec did, and you were at the center of that. Your friendship with Ann is one of the TV relationships I cherish most deeply because it wasn’t treated as secondary to romance; it was important and life-changing for both of you. And for a young woman whose friendships with other women are currently the strongest relationships in her life, it meant the world to me to see a character who was a part of so many great relationships beyond just romance.

However, romance did play a key role in your story as time went on, and I’m incredibly grateful for the way that was handled. Watching you and Ben never failed to fill me with hope. I’ve been told throughout my life that certain things about me—my intelligence, my outspoken nature, my intensity—are intimidating, especially in the dating world. So imagine my delight when you—with all of those same intimidating qualities—never had to sacrifice or downplay who you were to find someone who not only loves you but respects you. Your marriage to Ben was written as one filled with mutual support for not just the other’s dreams but for who the other is at their core. And that’s incredibly inspiring.

When I think of the greatest lesson I learned from watching your story unfold, I always come back to one quote: “No one achieves anything alone.” Parks and Rec’s entire ethos was that it’s more fulfilling to build people up than to tear people down; good people can make great television. And that ethos started and ended with you. You were the single most supportive and encouraging character to ever be at the center of a TV comedy. And those two traits were directly linked to your success and the success of the other characters around you, too. You were allowed to be kind and successful. You were allowed to have friends and get stuff done professionally. You were allowed to be optimistic and serious when the situation called for it. And you were allowed to help others and have others help you without anyone looking weak for needing the support of their friends to make their dreams a reality.

When I think of my best self, she’s productive, passionate, and positive. She’s encouraging, open-hearted, and supportive. In short, she’s a lot like you. Thank you for helping me find and hold onto the kind of person I want to be by seeing that kind of person every week at the center of my favorite TV show.

I love you and I like you. I’ll miss you. And I’ll forever be grateful for the positive impact you had on the television landscape, as well as the lives of so many who watched Parks and Rec, myself included.

15 thoughts on “You Have All the Strengths: A Letter to Leslie Knope”