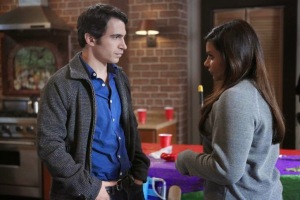 Title What About Peter?

Two-Sentence Summary When Peter moves into Danny’s other apartment, he interrupts Danny’s plans to combine his apartments to make room for more family someday, which doesn’t mean what Mindy thinks it means. Meanwhile, Jeremy is tasked with taking care of Lauren’s son, and he enlists Morgan’s help to get the baby to stop crying.

Favorite Line “I just want to be with someone who’s as excited and certain as I am about our future. And if you’re not, that’s fine. Just let me know—because honestly, I’m going to be fine no matter what happens.” (Mindy)

My Thoughts My feelings are all over the place as I reflect on this episode. On one hand, both the A and B plots featured characters showing surprising maturity and confidence (Mindy and Morgan). But on the other hand, both the A and B plots also featured characters who reacted to situations in ways that had me yelling at my TV: “YOU KNEW WHAT YOU WERE GETTING INTO, YOU IDIOT!” (Let it never be said that I passively watch television.)

Let’s start with the B-plot and work our way up to my complicated emotions about all things Mindy/Danny right now. After the strides Jeremy’s character made a few episodes ago, it was depressing to see him backslide into a pretty awful version of himself in this episode. Jeremy was Exhibit A in terms of my yelling at the television during this episode. When you date a woman with a child, you have to be prepared to interact with her child. You have to understand that she doesn’t stop being a mom just because she’s dating you, and the child won’t go away just because you want them to. Jeremy knew he was dating a woman with a baby, and yet he still wants nothing to do with the baby. I saw this storyline as a reflection of Danny/Mindy’s conflict on a less emotionally-compelling scale. Jeremy and Lauren have reached the point in their relationship where it’s time for Jeremy to decide whether or not he can deal with what being with Lauren—really being with her for exactly who she is—entails. And if I were Lauren’s friend, I would tell her he is no way, shape, or form ready for that.

What was interesting, though, was how quickly Morgan took to his role of taking care of the baby. It seemed fitting that an overgrown child with a huge heart like Morgan would be a natural with kids. I was frustrated with Jeremy for continually trying to leave Morgan with the baby, but at least the baby would have been with someone who liked him. It was also interesting to note that the baby seemed to like Peter more than Jeremy. We saw Peter really take an interest in the baby last season, and he definitely is closer to Morgan in terms of his personality than Jeremy. It was a little annoying to see that the only thing that made Jeremy want to take care of the baby was a sense of competitiveness with Peter, but it did ring true to his character.

Speaking of Peter, I really liked his storyline in this episode. He straddled the two extremes exhibited by the other characters—he had moments of growth but also moments where I wished he would have let himself grow more. And that was perfect for his character. His attempts at being responsible were really endearing, and I found it even more entertaining when he tried and failed—like leaving his groceries at a strip club. Peter’s friendship with Mindy has developed very organically, and I like seeing Mindy have a friend again who isn’t Danny. She needs that (which makes me sad when I think about Adam Pally leaving the show later this season). Mindy is someone who likes having friends, while Danny seems content without them. Neither mindset is better than the other, but I liked that their differing stances on friendship reflect what we know to be true about their personalities.

While Danny may say that he doesn’t need friends, it was nice to watch him change that mindset a little bit when it came to Peter in this episode. Yes, their shower scene was hilarious, but there was depth to their interactions, too. Peter can learn a lot from Danny, but Danny can learn from Peter, too. It’s clear that Peter needs some of the responsibility Danny has, but Peter also lives with a lack of fear and a way of embracing what’s in front of him that Danny needs if he’s going to make his relationship work. That kind of give and take between Danny and Peter really added to their last scene in the hospital. While it may have been sad to think that none of Peter’s other friends showed up to see him, it was nice to know that Danny was the one friend who did show up. If nothing else, Danny Castellano is loyal to the people he cares about.

While I really liked the growth we got to see in Danny and Peter’s relationship, Danny and Mindy’s relationship stalled at best or, at worst, backslid more than a little in this episode. Before I continue, I just want to say this: I completely buy Danny not wanting to move too quickly with Mindy because of his divorce and because of his abandonment by his dad. I get it. It’s believable and understandable. But it still feels a little bit like rehashing stuff I thought we’d moved past by last season’s finale.

On the top of the Empire State Building, Danny told Mindy he was ready to go “all in,” and he even went so far as to talk about their children’s names with her. That’s what makes it feel so strange for me to watch him suddenly so unsure if he even wants to spend the night at Mindy’s apartment or, as was the case in this episode, move in together. I thought Danny spending the night at Mindy’s was a sign that he was getting ready for a bigger commitment, but this episode felt like two steps back after that step forward in their relationship progression.

Maybe my frustration with Danny right now is coming from my frustration at myself for being duped by this episode’s very crafty bait-and-switch. I completely believed he wanted to make more room for a family with Mindy, so I was the kind of devastated only a fangirl can be when he revealed it was for his mom. (Annette, you ruin everything!) It seemed unbelievable to me that the thought of Mindy moving in with him at some point seemed to never even cross his mind until he was confronted with it by Mindy and by Peter.

It all comes back to Jeremy and Lauren and the idea of people knowing what they’re getting into. Danny knows who Mindy is. He knows that when she says she likes the idea of going all in, she isn’t going to approach it tentatively. He knows Mindy is someone who likes commitment and may be a dramatic personality but likes stability in her relationships. He knows she wants the traditional “happy ending”—marriage, babies, etc. And we as an audience know that, too. It’s why it’s breaking my heart to think that—while I know this will all be fixed at some point—what these two characters need right now could not seem more incompatible.

That last scene between Mindy and Danny was one of the most honest this show has ever had. Neither of them is to blame—Mindy isn’t crazy for needing more from a long-term relationship as an adult woman, and Danny isn’t crazy for needing more time. It’s a struggle that feels very real, and that makes it harder to watch. I’ve never believed that these characters would break up, and that confidence has been wonderful. But now, if I was Mindy’s friend, I would tell her to really think about whether or not she feels she can keep waiting for Danny to stop being afraid.

That’s why I was so surprised and so proud of Mindy in that last scene—she did what I would have wanted a friend to do in that situation. She stood up for herself, she stood her ground, and she did it all without resorting to melodramatics. That kind of grounded self-respect is something we don’t see often from Mindy, but when we do see it, it makes for some of the show’s best moments. Kaling delivered all of those lines perfectly, with a quiet confidence that let us know that Mindy has become a woman who loves herself enough to break the cycle of desperation she seemed to be in for so long in her relationships. It’s a good look on Mindy Lahiri.

I love moments when I get to feel genuine pride for a fictional character, and I felt so proud of Mindy for finally saying she wants to be with someone who is as excited to be with her as she is to be with him. So often, that has felt like a huge imbalance in her relationships, and it was beautiful to see her sense of self-worth growing before our eyes. While that scene may not have meant good things in the moment for Mindy and Danny as a couple, it meant great things for Mindy as a woman. For the first time in a long time (if ever), I finished an episode of The Mindy Project genuinely inspired by Mindy Lahiri.