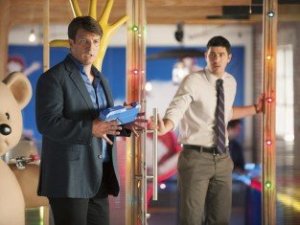 Two-Sentence Summary As Castle and Beckett attempt to return to a normal life after his disappearance, they investigate the murder of a toy company CEO who went undercover to prove his toys were being used to smuggle drugs. However, things are still far from normal for Castle, who is given some disturbing new clues about his disappearance and memory loss.

Favorite Line “It’s Canada. How risky could it be? And need I remind you, I’m a grown man. I don’t need to ask your permission. That being said—please?” (Castle)

My Thoughts After last week’s question-filled season premiere, I was concerned that Castle would want to take the focus off show’s newest overarching mystery and instead return to its typical procedural format, with just a few mentions here and there of what had happened before the inevitable sweeps week episode that pushes it to the forefront again. Thankfully, “Montreal” proved that my worries were unfounded, at least for this week. There was none of the tonal whiplash that Castle can sometimes have after “important” episodes, and I think a lot of that came from the way this show directly addressed the concept of being unable to return to normalcy after the events of “Driven.”

Was I particularly interested in the case of the week? No, but I don’t think I was supposed to be. This could become a problem if a divide between Castle and his mystery and Beckett and her job continues, but, for this episode at least, the case worked more as a symbol of normalcy than an actual case. It allowed for moments where Castle could be his playful self (the Big moment on the piano), and it allowed Castle a chance to offer his theories again after everyone voiced that they missed them. But it ultimately was a case that felt much less important than the larger mystery surrounding Castle, and it was supposed to. It represented a life that Castle wanted to embrace without hesitation before discovering that the questions about what happened to him won’t let him simply focus on trying to have a normal life. In the same way, we as viewers can’t just focus on the “normal” cases while we know there’s still a more important mystery out there.

It’s even harder to focus on anything but the mystery surrounding Castle’s lost two months when it’s allowing the actors to do such great work. Last week was Stana Katic’s turn to shine, and she had plenty of wonderful moments in “Montreal,” too. But this episode belonged to Nathan Fillion. When he’s given good dramatic material to work with, he tugs at my heartstrings like no other actor on television.

I knew from the start that Fillion’s talent for nuance was going to be put on display in this episode. The interview scene was perfect—you could feel the tension and frustration in Castle, but he never lost his cool. Fillion has such a gift for never overplaying emotions, and that was used perfectly in this scene to show that Castle might have felt completely ambushed and angry, but he had to hold it together because he had a job to do and a persona to project. That scene was a nice way to remind us that Castle is a celebrity, so his disappearance would have been noticed. The dichotomy between Castle as the affable, cool celebrity writer and the real man underneath the façade is always interesting, and I thought Fillion did a great job showing Castle working to keep it together when the annoyance was seeping out of his pores.

I’m really enjoying the irony of a mystery writer who always offers up the craziest theories about cases having literally no idea what happened in his own life for two months. It’s a mystery that not only can’t he solve—he’s the reason he can’t solve it. I think the revelation that Castle wiped his own memory was supposed to be a big surprise, but, once again, Alias got there first. (I’m continuing to hope that Castle’s alias during his disappearance was Julian Thorne just so I know for sure that all these nods to Alias aren’t coincidental.)

What I’ve come to learn not just in watching Castle but in watching almost every show is that plot points don’t often shock me anymore, but the reactions characters have to those twists and within those plots still have the ability to surprise and impress me. (And every once in a while, there’s a twist that still knocks me off my feet, which is always fun when it happens.)

For example, I had a feeling those memory cards were going to contain video messages from Castle to his loved ones. However, the emotional impact of what was on the memory card was the important part—not trying to decipher the mystery of what was on it. And the emotional impact of Beckett watching Castle’s “last words” to her—and watching Castle watch Beckett at the same time—was astounding.

There’s just something special about a well-timed “Always” on this show, especially one delivered by Fillion. It never fails to reduce me to tears. And the emotion of that moment was heighted by Fillion’s face as Castle watched Beckett process his words. There was genuine concern there for her and also for himself, which I think is because Beckett is the one he can let his guard down in front of and show just how lost he feels about what happened to him. He can’t do that with Martha and Alexis.

But Beckett was there for him in his confusion and concern because this was what she needed—this reassurance that she wasn’t wrong to trust her heart instead of her head. We know she believed him, but we also know how hard it was for her to let go of the part of her that follows the facts in order to believe that he really didn’t leave on his own. Beckett is a skeptic, a woman who craves evidence. And here was the biggest piece of evidence she could have hoped for—her fiancé telling her it wasn’t his choice to leave her and that he loves her. Always.

Katic played Beckett’s relief so perfectly. It was like she could finally use both her head and her heart again without feeling like using one was betraying the other, and she could allow herself to focus not on believing Castle but on reassuring him because she finally had reassurance for herself. When she gently touched his face, that small gesture of soothing affection said so much. They’ll face whatever happened to him together. They might be unsure of everything else, but the one thing they can be sure of is the fact that they’ll always love each other through whatever obstacles come their way.

I have a feeling they’re going to need the certainty of their love more than ever because Castle’s whole world is a sea of unknowns right now. I want to know who this fake Henry Jenkins is and what he has to do with Castle’s disappearance. I want to know how he knows things about Castle that no one—not even Beckett—knows. I want to know what made Castle become a mystery writer. What happened to him when he was 11 that’s haunted him for his whole life? (The mention of what made him a mystery writer only furthered my belief that 3XK is behind this, since from their first meeting he wanted to know why Castle is obsessed with death.)

Part of me wants to know these answers for myself, but part of me just wants to know them so Castle will stop hurting. Fillion played that confrontation scene with the fake Henry Jenkins (Does he have a real name?) perfectly. I felt his exhaustion, his desperation for answers, and his horror at having revealed something so personal (and, it seems, so dark) to this man who he doesn’t remember at all. These mysteries matter to us as viewers, but, more importantly, they matter to these characters. I may want the answers, but Fillion made me feel like Castle wants them even more than I do. And that’s all I want when I watch mysteries unfold on TV.

An actor’s conviction can go a long way towards making me buy into stories I wouldn’t normally support. That’s especially true for Castle and Beckett postponing their wedding for (at least) a month. I will be the first to say that after last season’s finale, I thought this new mystery was a contrived way to keep them from getting married. However, both Fillion and Katic have me not just accepting but genuinely believing that neither character is in a place where they can get married right now. But they also have me believing that they’ll get there.

The bedroom scene that closed the episode was a lovely parallel to last week’s, which showed us how Castle and Beckett are slowly healing and finding their way back to each other. There’s no distance or tears anymore; they’re laying in bed together. But they’re still not ready to get married. Castle’s attempt to rush it and Beckett’s immediate refusal was done very well. It highlighted the fact that these two characters are adults who have gone through too much together to use marriage as a tool for finding a kind of normalcy they may never have again. Instead, they need to work on living with and loving within the lives they have now instead of trying to pretend the disappearance didn’t happen. And that will take time. Castle will never be able to pretend his disappearance didn’t happen—one look at his face at the conclusion of the episode showed he can’t just let it go (nor should he). And he can’t use marriage as a way to undo what’s been done. Instead, I’m eager to see him work through these new demons with Beckett by his side. Of course I’m still eager to see a wedding, too, but I can be patient—at least for another month.