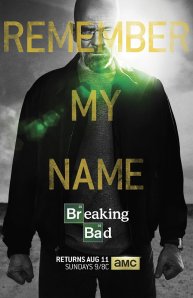 How many Emmys will the final season of Breaking Bad win?

For as frustrated as I was with the 2014 Emmy nominations when they were announced, I’m still excited to see TV’s best (with some notable exceptions) celebrated on Monday night. Although I don’t watch a lot of what’s considered “critically acclaimed” television, I’m still going to attempt to predict the show’s big winners. I’m also going to offer my thoughts on who I wish would win in these categories, too.

I’m not including the miniseries or TV movie categories because I haven’t seen any of those nominees. However, if you have thoughts on who will/should win those categories (as well as any others I’ve left out), let me know in the comments. And I’ll be live tweeting the evening’s festivities (including any red carpet coverage I can watch after work—why are these awards on a Monday?) over on the NGN Twitter account.

Outstanding Drama Series
My Pick and My Wish: Breaking Bad
My Thoughts: I will preface this by saying I think Breaking Bad and True Detective are going to split the series and actor categories. So if Bryan Cranston wins for acting, I think True Detective will take home this award. Ultimately, it’s a very close race, but I think Breaking Bad’s final season will be recognized to honor the show’s part in TV history. Years from now, Breaking Bad will be known as one of the pillars of this new Golden Age of television, so I think the Emmys will take advantage of having one last chance to honor it.

Outstanding Comedy Series
My Pick and My Wish: Orange Is the New Black
My Thoughts: I know the Emmys are often afraid to break away from the familiar, but the impact Orange Is the New Black has had on the television landscape shouldn’t be denied. I think this will be Emmy voters’ chance to recognize Netflix as a platform since I don’t think House of Cards will take home any awards this year. Not only would this be a way for the Emmys to make a statement that they’re not stuck in the past, it would be a way to recognize a show that’s unlike anything else on television.

Outstanding Lead Actor in a Drama Series
My Pick and My Wish: Matthew McConaughey (True Detective)
My Thoughts: Step two on the quest for a McConaughey EGOT begins on Emmy night. I’m incredibly impressed with what he’s done with his career in both film and television, and I wouldn’t be disappointed at all to see his incredible year continue with an Emmy.

Outstanding Lead Actress in a Drama Series
My Pick: Julianna Margulies (The Good Wife)
My Wish: Lizzy Caplan (Masters of Sex)
My Thoughts: Let’s be honest; my real wish here is for Tatiana Maslany to win on as a write-in or something. However, I think a win for Caplan would be the next best thing. I would love if this category was one where the Emmys tried something new and rewarded an actress who made a career breakthrough in a universally beloved role. However, I think this is a category where they’ll end up sticking with what they know, which I can’t say I’ll be too upset about. I thought Margulies turned in the best work of her career this season on The Good Wife. She made the exhaustion of grief hit home in such a quietly powerful way, painting one of the most realistic portraits of mourning a senseless, unexpected death that I’ve ever seen.

Outstanding Lead Actor in a Comedy Series
My Pick: Jim Parsons (The Big Band Theory)
My Wish: Louis C.K. (Louie)
My Thoughts: The Emmys love Jim Parsons. And I think he’s going to lose his miniseries category to Matt Bomer, so this will be their way of recognizing him for such a varied body of work this season.

Outstanding Lead Actress in a Comedy Series
My Pick: Julia Louis-Dreyfus (Veep)
My Wish: Amy Poehler (Parks and Recreation)
My Thoughts: I have a theory that Poehler could actually win this year because it wasn’t her show’s strongest season, and that seems to fit with the way the Emmys work. However, I still think she’ll take home the award next season because it will be her last chance to win for playing Leslie Knope. This year, I think this award is still JLD’s to lose. And as long as she keeps being as funny and charming at award shows as she always is, I won’t mind too much.

Outstanding Supporting Actor in a Drama Series
My Pick: Aaron Paul (Breaking Bad)
My Wish: Josh Charles (The Good Wife)
My Thoughts: I would love to see Charles get some recognition for the power of a performance that made us all mourn Will Gardner, but it’s hard to deny Paul another Emmy for his fiercely emotional work in a role that has seemingly earned a place in the pantheon of great supporting characters in television drama.

Outstanding Supporting Actress in a Drama Series
My Pick: Anna Gunn (Breaking Bad)
My Wish: Christine Baranski (The Good Wife)
My Thoughts: If you read my latest Fangirl Thursday post, you know how much believe Baranski deserves this Emmy for her masterful use of restraint and subtlety in her show’s most emotionally complex season yet. However, I don’t think anyone who watched (or even heard about ) “Ozymandias” can deny Gunn an Emmy for her work in that episode. The image of Gunn weeping in the street is one burned into our collective TV-watching consciousness because of the raw power she unleashed as Skyler White’s world fell apart.

Outstanding Supporting Actor in a Comedy Series
My Pick: Tony Hale (Veep)
My Wish: Andre Braugher (Brooklyn Nine-Nine)
My Thoughts: I really hope the Emmys prove me wrong on this one. My gut says they’ll go for a show and an actor they’ve recognized before, but I don’t think anyone in comedy deserves an Emmy more than Braugher does this year. His ability to find the humor in stoicism is so rare, and his line delivery was one of the best things about television as a whole this year.

Outstanding Supporting Actress in a Comedy Series
My Pick: Allison Janney (Mom)
My Wish: Kate McKinnon (Saturday Night Live)
My Thoughts: For as fantastic as I think McKinnon is (she was the glue that held a rocky SNL season together), I don’t think the Emmys can resist giving Janney all the awards they can give her. And as a devoted Janney fan for years, I can’t say I’ll be complaining if she wins.

Outstanding Variety Series
My Pick and My Wish: The Tonight Show Starring Jimmy Fallon
My Thoughts: It’s hard not to love Jimmy Fallon, and I think that’s true for viewers as well as voters. His enthusiasm is infectious.

Outstanding Reality Competition Program
My Pick: The Amazing Race
My Wish: So You Think You Can Dance
My Thoughts: The Emmys can’t go more than one year without a win for The Amazing Race. It’s some sort of award show law. And since The Voice won last season, I’m expecting a return to normal for this category this year.

What are your Emmy night hopes and predictions?