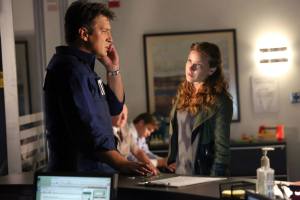 Two-Sentence Summary When a woman with a dark past appears to have mudered her boyfriend, she takes a group of people hostage until her favorite mystery author—Richard Castle—can prove her innocence. Castle and Beckett team up with Ryan, Esposito, and Captain Gates to uncover a tangled web of people willing to do anything to expose the truth and others willing to anything to keep it hidden.

Favorite Lines
Beckett: Listen, I’m kind of looking forward to spending the rest of my life with you, so don’t do anything stupid in there, okay?
Castle: Hey, don’t worry. I think I already hit my “stupid quota” for the day.

My Thoughts Most of my favorite Castle episodes include some combination of these factors: a case that’s different than your standard procedural fare; guest actors who make you truly feel the weight of the case; at least one moment with Castle’s family; a real sense of love and trust between Castle and Beckett; some quality time with the entire 12th precinct family; and a strong balance between all of the genres that make this show a very unique success. In most cases, even the strongest Castle episodes can only fulfill some of those requirements. Imagine my surprise, then, to see that six seasons after Castle first premiered, it was able to produce an episode that so effectively incorporated all of those factors. “Number One Fan” was the best episode of this young season, and it proved to me that the new, confident tone I was so impressed with in “Valkyrie” is here to stay.

The episode began on a high note and never looked back. The tone of the first scene was perfect. I feel like this season’s writers have shown a really strong grasp of how to integrate Castle and Beckett’s relationship into the rest of the show. The opening scene with the two of them in bed talking about her lost job was filled with the easy domesticity and natural feeling that should come from the interactions of an engaged couple. It allowed Stana Katic and Nathan Fillion’s unforced chemistry to take a simple scene of exposition and wrap it in the kind of warmth that feels right for where these characters are in their relationship.

Of course, the tone of the scene shifts from sweet to silly the second other characters begin parading in and out of their bedroom, but that’s what I love about Castle. The tone can turn on a dime, but that’s the way real life works. I still don’t understand Pi’s purpose (and I feel like he’s taking away from Alexis as a character right now), but I did have to laugh at the way his presence brings out the snarky side of Castle like nobody else. And I couldn’t stop laughing at Martha in her stage combat outfit. The way this scene’s comedic tone escalated reminded me of the opening of last season’s “After the Storm,” and I mean that in the best possible way.

It was a good thing this episode began with such a silly moment of comedy because, once the action really started, it was one twist, turn, and emotional moment after another. This episode had one of the strongest cases in a long time, and so much of it came from the emotional connection we were able to build with Emma and the way it utilized so many things we’ve come to learn about Richard Castle as a character. I love when the show reminds us of Castle’s work and his fame, and this episode took that a step further. It wasn’t just a reference; it was what the plot of the entire episode was based around. I loved the way it was hinted that much had been written about Castle and Beckett’s working relationship outside of just his books—because that would be true of a bestselling author who has such an interesting relationship with his muse. And I liked that Emma’s knowledge of Castle’s experience with the NYPD was what motivated her to ask for his help clearing her name. Castle is the kind of person who follows his gut and looks for the story even when the facts all point in another direction, and it makes sense for Emma to hope that he of all people would be able to solve this case.

Castle is also someone who puts family and love above all other things in his life, so from the moment we found out that a little girl was being held hostage, I knew he would trade himself for her. I love when a character’s decisions are completely true to who we know them to be. Castle’s presence in the middle of the hostage situation reminded me of Season Four’s fantastic “Cops and Robbers,” and it was nice to see how much his relationship with Beckett has grown since then. The scene where Beckett is helping Castle put on his bulletproof vest was so tender and vulnerable. I like getting to see these characters be unafraid to say what they really feel when it comes to their relationship. It’s a nice change from so many seasons of walls, secrets, and uncertainty. The small, physical moments in that scene were spot-on in making it all feel very real and emotionally honest: Beckett’s repetitive smoothing of his vest; the way she adjusts his collar; and the way she worriedly plays with her engagement ring as he enters the building. I’m a very detail-oriented person, so it makes me thrilled beyond belief when a show I’m watching makes sure to add as many realistic touches as possible to a scene—and Castle has always been so good at that.

The case progressed the way all the best Castle cases do: with more twists than even the most thrilling rollercoasters. With each phone call between Castle and Beckett, the tension escalated, and I loved that there was a brief moment when I really did wonder if Emma was guilty. When Beckett called Castle to tell her about Emma’s prior murder conviction, I found myself holding my breath—not just because I was surprised but because I really didn’t want Emma to be the killer. Alicia Lagano did an excellent job of making me care about Emma, and when the story of what happened with her foster brother was revealed, I found myself more invested in a Castle suspect’s guilt or innocence than I had been in quite some time.

That emotional connection we as an audience were able to build with Emma paid off at the conclusion of the episode. Yes, it was another smart twist to have the smarmy lawyer be the actual killer, but that wasn’t the conclusion to the case that really mattered. No, what mattered is what happened on an emotional level for this woman who had been looking for a family for her entire life and had it taken away when her boyfriend was killed. Watching her reunite with the father who gave her up for adoption was beautiful; I will proudly admit that it made me cry. Giving the “case of the week” real emotional resonance was something Castle excelled at in its early days, and it was nice to see that happen again.

Another happy return was Beckett’s return to the 12th precinct. I think we all knew the “hiring freeze” wouldn’t last past this episode, but that doesn’t mean it wasn’t emotionally satisfying to see the way she earned her place back among her little family at the 12th. I loved her interactions with Gates; Penny Johnson Jerald has done such a wonderful job bringing depth, life, and strength to a character I was sure I would never warm up to. Now she’s one of my favorite things about the show, and watching her work with Beckett is always a highlight—the respect both women have for one another is a beautiful thing to behold.

Like I said, we all knew Beckett was going to get back to work at the 12th, but I had no idea her return would be so warm and joyful. The scene where Esposito and Ryan finally admitted how much they miss her was adorable, but it got even better when Beckett revealed with the biggest smile possible that she was coming back. The applause that followed was touching in a way that felt earned and genuine. And the kiss between Castle and Beckett—their first in the precinct—was a great way to end the episode with the kind of warmth that was present from its first scene to its last.