My Parks and Recreation review will be up sometime tomorrow—I needed to make a detour to Storybrooke on my way to Pawnee this week. 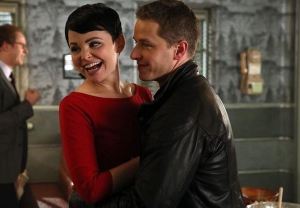 In case you haven’t heard, today is a pretty good day if you’re a fan of fairytale romance. Ginnifer Goodwin and Josh Dallas, who play Once Upon a Time’s Snow White and Prince Charming, are getting married! The pair announced their engagement this morning and followed that up with an adorable confirmation of the news via Twitter.

Goodwin and Dallas showed a uniquely intense and genuine chemistry from the pilot of Once Upon a Time onward, and it’s been a real joy to be a fan of theirs and watch their real-life love story develop. Both actors seem like good people, and I add my name to the many today wishing them the happiest of beginnings for their life together.

Today I’ve decided to take a little trip down memory lane and relive some of the best of Goodwin and Dallas’s onscreen love story to celebrate this next step in their off-screen love story. So without further ado, here are my top 10 Snow White and Prince Charming moments, and I hope they serve as a nice little reminder of just how happy “happily ever after” can make us feel.

10. The Reason I Go to Granny’s… (Season One: “7:15 A.M.”)
This is one of those scenes that makes you want to hold your breath during it because you’re afraid to break the spell it’s casting. When I think of this scene, I think of Goodwin and Dallas’s adorable commentary track for this episode on the Season One DVDs, because during this scene they talked about how they’re each others favorite scene partners—and it shows. It’s filled with such quiet intensity and vulnerability, and the way Dallas looks at Goodwin during this scene will never fail to give me the best kind of goose bumps.

9. One Thing Does Make Sense… (Season One: “That Still Small Voice”)
The early “John Doe” scenes between Dallas and Goodwin are still some of my favorites from Season One because they glow with an easy, unforced warmth and a familiarity that works so well for the story of cursed Charming and Snow finding each other despite not knowing who the other is. This scene especially hums with real sincerity from both actors. The moment when “John Doe” tells Mary Margaret she’s the only thing that feels right could have come across as unbearably cheesy, but Dallas’s earnestness makes it a heart-stopping moment instead. And I adore the way Mary Margaret’s face lights up when he confesses that to her.

8. Something I Already Knew (Season Three: “Lost Girl”)
I could wax poetic about Charming forever, but I’ll let this scene serve as the prime example of why he is such a brilliant character: his faith in his wife. Snow is an incredibly strong woman, and Charming believes that even when she loses sight of it. That’s such an inspiring thing to see in any relationship—real or fictional. Charming is so sure of Snow’s abilities as a leader in this scene, and that kind of support runs to the very heart of what makes Once Upon a Time such a special show.

7. A Few Traumatic Childhood Memories (Season Two: “The Cricket Game”)
This scene is all about Dallas and Goodwin’s chemistry. There’s a kind of innate joy they project in the scenes where they’re allowed to just be together without any obstacles or angst, and this scene is full of it. Their smiles are so adorable; I’m not sure Goodwin has ever looked more radiant. Jennifer Morrison’s reactions make this scene comedy gold (never has the word “tacos” been funnier), and I dare you to keep from smiling at that last stolen kiss before the scene is done.

6. It Was Worth It (Season Two: “Into the Deep”)
Charming would literally go to hell and back for his wife—that’s what this scene showed me. The way his dedication to her was made so tangible in this scene continues to amaze me. (I mean, the man jumps through fire for the chance to kiss her!) His faith in her ability to find and save him gives this scene such emotional power, and I think it’s one of Charming’s defining moments. From the way he says “It was worth it” to her anguished “I’m waking up,” Dallas and Goodwin gave everything to each other as scene partners here, and it paid off with one of their best moments of the whole second season.

5. I Know It Better Than Anyone (Season Two: “Selfless, Brave, and True”)
There were few things I hated more in Season Two of Once Upon a Time than the “Snow’s dark heart” storyline. But I can never wish it didn’t happen—because it gave us this incredible moment of real pain and love in the middle of the crazy magical plots of Season Two’s back half. The honesty, love, and support running through this scene continues to floor me every time I watch it. This is such a great representation of Snow and Charming’s marriage—they always find each other; even when they feel they’ve lost themselves.

4. No One You Can Remember (Season One: “Heart of Darkness”)
This was the first real glimpse we were given of the way Dallas and Goodwin can bring to life the all-encompassing happiness of love. The scene begins with real pain (watch Charming as Snow says she doesn’t love him), but then it evolves into a truly beautiful expression of the kind of love that brings out the best in us. The details of this scene are perfect: the way both of them have tears trickling down their faces without being over-dramatically emotional; the crack in Goodwin’s voice when she says “Charming?”; and the way each kiss is given with such genuine smiles.

3. I Will Always Find You (Season One: “Pilot”)
The kiss that started it all…This was the scene that showed me that this wasn’t going to be the traditional take on the Snow White story—because these two actors made me feel that these two characters had already developed a love story so much deeper than their animated counterparts. From the way Snow teasingly says “The glass coffin gave me pause” to the way they were touching each other throughout the whole scene (his hands on her hair, hers on his face), there is a real sense of intimacy between these two characters that only continued throughout the pilot, proving to me that these two actors have a very rare kind of chemistry.

2. You’ll Find Me (Season One: “Snow Falls”)
This scene is wonderful for so many reasons. First of all, there’s Dallas’s face, which is a thing of smitten beauty throughout the whole scene, especially in that perfect moment when Snow tries on Charming’s ring. Then, there’s the simple power of the way both Dallas and Goodwin deliver their “You’ll find me…Always” exchange. There’s such a sense of longing in this scene, a real feeling of two people knowing they’ve found love but have to walk away from it. In order for this episode (and, really, this whole show) to work, the audience had to believe that these two characters could fall in love within the course of this episode—and Goodwin and Dallas sold that idea with everything they had.

1. We’re Going to Have a Child! (Season Two: “Lady of the Lake”)
If you ever want a dose of instant happiness, watch this scene. It’s filled with so much hope, so much devotion. There’s not much I can say about it without dissolving into an incoherent mess of happy emotions, but I will say this: The love and joy so evident in this scene cannot be faked, even by the best of the best. It’s a great showcase for the skills of these actors, but, even more than that, it’s a great showcase for the way love—real or fictional—has the power to make us happy simply by being witnesses to it. And if that’s not a magical thing, then I don’t know what is.

5 thoughts on “Happily Ever After: The Best of Snow and Charming”