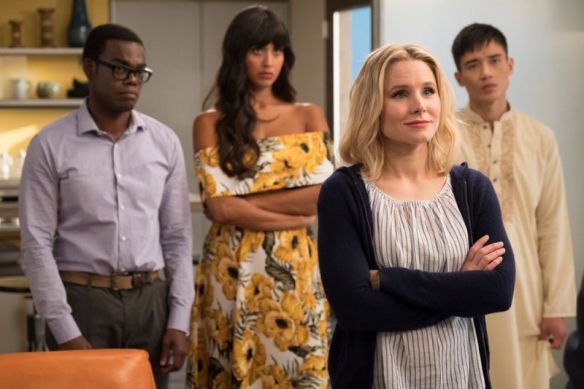 “If there were an answer I could give you to how the universe works, it wouldn’t be special. It would just be machinery fulfilling its cosmic design. It would just be a big, dumb food processor. But since nothing seems to make sense, when you find something or someone that does, it’s euphoria.”

When I think back on 2019, I’ll think of this quote from The Good Place. At many points this year, things—personally, professionally, and in even in my fangirl life—didn’t seem to make sense. This was a challenging year on a lot of levels for me and for a lot of people I know—and even a lot of people I know only through this wonderful world of fandom. But through it all, one of the best and most beautiful things about it were those brief moments when something clicked—when something finally made sense and the pieces fell into place and for just one moment it was euphoria.

Looking at my favorite pieces of media this year, they’re all connected by that thread—moments of euphoria amidst the pandemonium. As I searched for meaning in the chaos of my own life, I found comfort, catharsis, and so much joy in watching fictional characters do the same.

It began with The Good Place—the show that gave us those beautiful words about our search for meaning and where we find it. There’s no more perfect show for this current moment in our world because it never tells us that life is supposed to be painless or that being a good person is easy. It acknowledges that life can be hard and hope can feel a million miles away and happiness can be fleeting. But it also reminds us that the important thing is to never stop trying to make things a little better for your fellow human beings. That’s how we find euphoria—in connecting with others, for a moment or for eternity. And maybe—just maybe—those connections—that love—can be the thing that saves us all.

There’s no message more brazenly, bravely, beautifully hopeful than that.

And almost every other piece of media I loved this year followed in those footsteps—reminding me that there’s hope to be found in moments when we feel truly understood and accepted—by others or even by ourselves.

That message was there in Fosse/Verdon, which will be mostly be remembered for Michelle Williams’s almost terrifyingly genius performance as Gwen Verdon but which was also a beautiful meditation on people who both lost and found themselves in the art of dance and eventually found in each other another person who finally understood their drive, their ambition, and their vision. There’s no better example of people finding something that makes sense in the swirling storm of life’s uncertainties than Bob Fosse and Gwen Verdon falling in love through choreography.

It was there in Russian Doll, which I thought was going to be a quirky dark comedy and actually turned into one of the most creative and beautiful explorations of human connection I’ve ever seen. Watching the entire plot of this show reveal itself to be about two people who need to save each other through reaching out in acts of kindness was such a gorgeous surprise. Like The Good Place, Russian Doll is a show that is never naive about how hard life can be but also never lets us forget that we can make life a little easier for others—and for ourselves—when we reach out to both ask for help when we need it and to help others when they need it.

It was there in Fleabag—my favorite TV show of 2019. “You know how to love better than any of us,” Fleabag’s father tells her. “That’s why you find it all so painful.” While the first season of this show was about the self-destructive ways people deal with love and loss and the chaos of being alive, the second season was about the beauty—however fleeting—of being seen and understood by another human being. Yes, Fleabag and Hot Priest’s scenes were almost unbearably sexy (“Kneel.” That’s it. That’s all I need to say.), but what was even better about their dynamic was what it said about love—even love that can’t last. Even though watching the person you found euphoria with walk away feels like a pain you’ll never recover from, it’s not a total loss. It’s proof you were able to love even after thinking you were completely broken, and there’s hope to be found in that. Euphoria may not last forever, but it’s a gift of hope for however long it does last, and Fleabag nailed that tone of bittersweet hope so brilliantly I could cry just thinking about it.

It was there in so many other shows I watched too—from GLOW’s reminder that a chosen female family can help each other make sense of a world that still doesn’t know what to do with self-actualized women to the small moments of family, friendship, and kindness that punctuated the pain in When They See Us. And even in Game of Thrones, a show that lost its way in the end because it lost so many of the human connections that had anchored it in favor of shock and spectacle, we were given one brief, beautiful moment of euphoria: Brienne of Tarth being knighted by the man who saw her and loved her for exactly who she is. That moment was the one bright spot in a dark final season because it was about two people coming together to say “I see you,” in the language they understand—the language of knightly values. It was a moment of joy, warmth, and love in the middle of what became one of the bleakest final seasons of any show I’ve ever watched, and it’s a moment many of us have clung to as its last gasp of goodness.

This year was also a year I discovered euphoria even more often in the comforting darkness of a movie theater. Falling back in love with movies and allowing myself to get swept up in their big emotions and escapism has been such a gift. And whether it was in the biggest blockbusters (Avengers: Endgame and its powerful “Portals” moment of support and its conclusion that celebrated both the love and respect between friends and the hope of happiness through romantic love) or smaller movies (Jojo Rabbit’s powerful story of change through human connection and Marriage Story’s heartbreaking but hopeful reminder that love sometimes still exists even when a marriage ends), I found myself deeply moved by these larger-than-life stories of people finding belonging, acceptance, and love on the big screen. The theme of finding meaning was even there in the pitch-perfect Frozen 2. Elsa discovery that she’s the one she’s been waiting for—her acceptance of her power and her future—was one of the most powerful examples of finding a place in the world that I saw this year.

I could also talk at length about how finding people who truly see you and choose to stand beside you in life’s most difficult moments—and the love that comes from that, however briefly it might last—is the backbone of Star Wars: The Rise of Skywalker, but I’ll save that for the very long post I’m planning to write in the coming weeks.

This was a long year, and at times, it was a hard year. That’s why so many of these stories being honest about euphoria mattered so deeply. It doesn’t always last forever. Sometimes Hot Priest has to walk away. Sometimes your soul mate’s memory gets wiped. Sometimes your best friend, your mentor, or the love of your life sacrifices everything to save the world. Sometimes all you get is one kiss and one smile before part of your soul is taken from you. But that doesn’t mean it wasn’t real. That doesn’t make it less beautiful or less important or less meaningful. In fact, it reminds us that any moment of happiness, love, and genuine understanding deserves to be celebrated—because it proves that we’re capable of so much goodness, so much love, and so much bravery.

It takes guts to be happy—even if it’s just for a moment. And what all these examples of characters finding happiness and meaning make me feel is an overwhelming sense of hope. The meaning of life isn’t some big mystery. It’s actually pretty simple. We’re put on this Earth to help each other as we’re—in the words of my favorite, Princess Anna—“stumbling blindly towards the light.” That’s the energy I want to bring in to 2020. Let’s help each other make sense of what can often feel like a big, dumb food processor. That’s the best way to make this place feel a little more like The Good Place in the coming year.

5 thoughts on “Discovering Euphoria: 2019 in Review”