This is the latest in my series of letters to inspirational female characters that will be compiled in a book alongside letters from my fellow fangirls and fanboys. If you are interested in being part of The Fan Mail Project, I’m still taking submissions on a case-by-case basis, and you can check out all the information here! 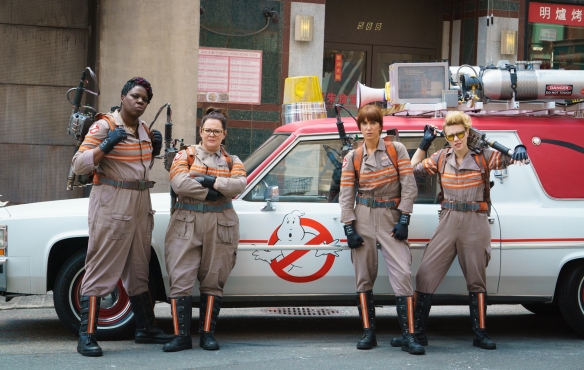 You made me cry. Normally, this would not be much of a surprise to anyone, but even my intensely emotional self can usually keep it together during action scenes in summer blockbusters. But there you were, battling ghosts, guns blazing, and I couldn’t help it. I thought of the millions of little girls who would watch that scene in the coming days, weeks, and years, and I felt so overwhelmingly grateful for the fact that they will grow up in a world where women like you get to save the day.

A group of girls will grow up with that image—four female friends fighting ghosts without any help from a man and without ever having their looks become the focus instead of their skills—being their introduction to action movies. They’ll grow up with that image stuck in their minds and written onto the fabric of their fangirl hearts, and that’s a kind of power that not even the strongest proton pack can produce.

That’s why all the talk about the four of you “ruining” people’s childhoods was such garbage. You can’t ruin a childhood that already happened. But you can help create a brighter childhood for a new generation of young girls. And that is exactly what you’ve done. Your purpose isn’t to create nostalgia for the past; it’s to create inspiration for the future.

The world you inhabit is a world where women fighting ghosts isn’t seen as a big deal. And that matters. (It’s also sadly far away from the world we actually inhabit.) If they only paid attention to the movie, young girls watching Ghostbusters might not ever think that there’s something atypical about you being heroes, and that’s how it should be. You’re treated as people and not as paragons of feminism or stereotypes of “strong female characters,” and it’s so important for girls to see a world where women aren’t defined by their gender or limited by it. You’re ghostbusters who just happen to be women, and that kind of normalcy in terms of the treatment of female heroes is so rare, which makes it so important.

That doesn’t mean, though, that you aren’t examples of how to overcome common problems women face throughout their lives. So much of your collective story is based on the fact that no one will take you seriously when you talk about what you believe and what you’ve seen. Even when you have proof, what you say makes people uncomfortable, so you’re belittled and ridiculed and painted as delusional. People try to silence you, but you stand your ground. Thank you for being an example of what it means to own your truth in a world that is often uncomfortable with women speaking out about what they know, what they believe, and what they’ve experienced.

Even when you lose sight of your truth and feel you have to silence your own voice to find success in the world, you find your way back to your true self. Thank you, Erin, for making the wrong choice, for losing yourself in order to get ahead, and for placing success above staying true to yourself. It’s important for girls to see that they can make mistakes and lose their way without becoming the villain of a story. Your need to be accepted was explained by the trauma and ridicule you faced as a child, so your choices were ones we were meant to understand—even while we were also meant to disagree with them. And when you finally decided to embrace your truest self again, you were welcomed with open arms and respect. Your story shows that you don’t have to be perfect to be a hero, which is a lesson girls should be taught early and often. Your story also proves that you can always go home again, which is a reassuring truth for girls who are looking for a place to belong.

That home is found in the friends who know our true self and won’t let us forget it—even when we want to. Thank you, Abby, for being that friend for Erin. Thank you for being an example of a woman who knows who she is and never lets the world tell her who she has to be. You own your beliefs and your voice as strongly as you own your love of good Chinese food. You followed your passion and made it your life’s work, and you never gave up your dream—even when your best friend walked away. You kept going, and that steadfast sense of self made you the center of this entire group of strong, smart, unique women.

Speaking of unique, there is no one more unique than you, Holtzmann. Thank you for being strong and smart and gloriously strange. In you, so many young women who feel like that don’t fit in for any number of reasons have found someone to look up to. You’re not “cute and quirky” in the Manic Pixie Dream Girl mode. You’re weird in the way the best scientists are. You’re socially awkward, but you care deeply about your friends. You’re a brilliant engineer who creates weapons (a role that is almost always given to men—even in supposedly “girl power” action movies), and you find so much joy in science and in tinkering with machines. Thank you for teaching girls who feel like they’re different from those around them—especially the young members of the LGBT community who have become some of your biggest fans—that different isn’t just okay; it’s amazing.

Finally, thank you, Patty, for being the most relatable character in this story. You were just a concerned citizen whose love for her city drove her to seek answers. But your knowledge of New York—fueled by a deep interest in history—made you a valuable member of the team, and your common sense and quick thinking ultimately saved the city you love so much. But even more than your intelligence, thank you for your innate kindness. Even when you were at a job where you were disrespected and virtually ignored, you were kind to every person you interacted with. And thank you for being brave in what I think is the most admirable way a person can be brave—when you’re terrified. You didn’t sign up for any of this; you’re not a scientist or paranormal researcher. But you never ran away from helping your new friends; you never backed down from the fight you found yourself in the middle of. You acknowledge when you’re scared or concerned or confused, and you push through. And that is a kind of heroism that most people can relate to. Thank you for showing girls that you don’t have to be calm and collected all the time in order to be a hero. You can be freaked out and still save the world—you just have to believe in yourself and in the people standing beside you.

Thank you all for standing beside each other. Thank you for being friends who feel like real friends. Thank you for laughing together, for listening to each other, and for having dance parties while eating takeout. Thank you for disagreeing sometimes but always coming back to save each other in the end. Thank you for showing young girls that women have each other’s backs, which is something they see all too rarely in the media. Instead of fighting over men or only talking about clothes or gossiping about each other, you argue about your principles and talk about science and support each other. I believe so strongly that young girls emulate what they’re shown in the media when it comes to how to treat their peers, so thank you for giving them an example of female friends who are stronger together instead of “frenemies” who try to sabotage each other or one “strong” girl who only has male friends.

Thank you also for being so unashamedly smart, especially when it comes to science and engineering. Women are still minorities in STEM careers, so thank you for being physicists and engineers, for loving science and technology and using it to chase your dreams and kick ass. When girls see you saving the world with science—and with weapons you made—it normalizes the idea of female scientists and inventors. You make science look cool, and I have a feeling there are going to be more than a few female engineers and physicists in the future who will say their love of science was inspired by watching you on a movie screen when they were little.

Ultimately, I could exhaust myself writing all the reasons you are so important to the next generation of nerdy girls. But I will leave it at this: Thank you for being you. Thank you for looking like normal women and not like supermodels spilling out of tight, tiny “uniforms.” Thank you for wearing clothes that are functional for the work you need to do and not torn in a sexy way during your big fight scene. Thank you for being nobody’s love interest. Thank you for feeling like a reflection of so many girls and women who don’t get to see themselves in the media at all—let alone as heroes.

When you lined up before that big action scene with your guns drawn, I saw a group of women of different races, body types, academic interests, personality types, and sexual orientations standing together and preparing to save the world with their own inventions, scientific skills, and battle plans. And I knew that girls were going to see themselves and their friends from school or dance class or softball when they looked at you. Those girls are now going to find it easier to believe that they don’t need a boy to save them, but they don’t have to save the world on their own, either; they can rely on each other—on their fellow women. And that is a lesson so many women—myself included—surely wish we would have learned earlier in life.

When little girls see people who look like them and their friends on a movie screen, it gives them permission to dream. On behalf of all those girls who will now be dreaming of saving the world with science alongside their best friends, thank you.

5 thoughts on “Let’s Go: A Letter to the Women of Ghostbusters”