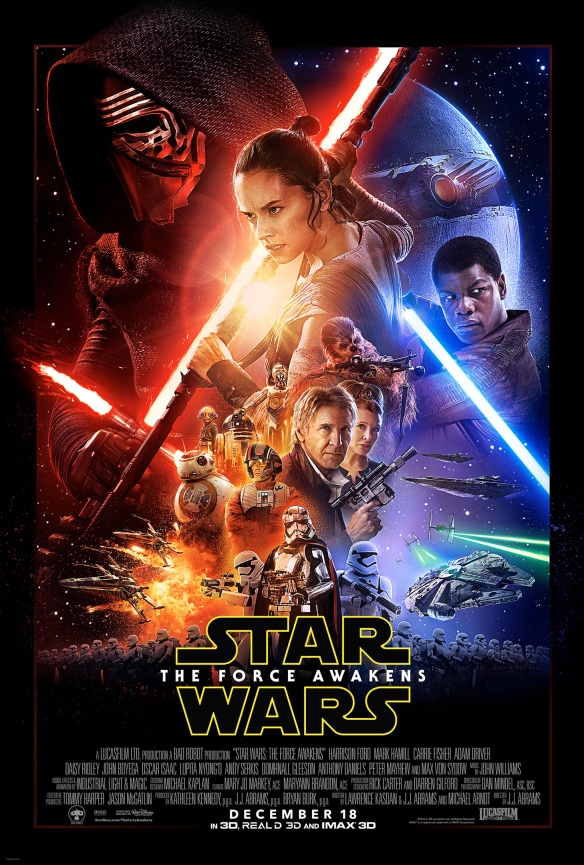 In honor of today’s deadline for submissions for The Fan Mail Project, I wanted to share my latest letter for this project with all of you!

I’ve written a lot of letters for this project. I’ve written to characters who shaped my past and to characters who are helping me be my best self in the present. But you represent the future. So, while I have certainly discovered things about you while watching The Force Awakens that have inspired me personally, I’m not writing this letter for me.

When I was a little girl, I used to play Star Wars with my cousins on the playground near my grandparents’ house. While I always had fun pretending to be Princess Leia, so many of our games involved the boys “rescuing” me from the jungle gym that we imagined was the Death Star. There were times—even when pretending to be one of the strongest women in sci-fi—that I felt like I was just playing a small part in their imaginary adventures.

When I saw The Force Awakens for the first time, my initial reaction was to think of the little girl who would one day be playing this version of Star Wars on a playground with her cousins. And I was overwhelmed with gratitude on behalf of that little girl—whoever she may be. Because when that little girl pretends to be you, she’ll be the hero of her own story, and it’ll be the boys who are part of her adventures—not the other way around. That little girl will pretend she’s flying the Millennium Falcon. She’ll pretend she’s breaking out of her holding cell on her own. She’ll pretend to hold a lightsaber and use the Force. And none of those imaginary adventures will seem crazy to her, because she’ll have seen you do all those things. And when you see someone like you doing amazing things—no matter if it’s real or fictional—you begin to believe that you, too, can do amazing things.

Not only will that little girl who sees your story believe she can have incredible adventures of her own; she’ll also believe she can do quite simple things that girls sometimes forget—or never even learn—they can do. Because that’s one of the most special things about your story, Rey: You’re a hero in the most obvious ways, but you’re also a hero in subtle ways. And it’s those subtle, deep reserves of strength and heroism that will work their way into young girls’ hearts and change their lives for the better without them even knowing it until they’re much older.

That little girl is going to grow up believing she doesn’t have to be unfeeling to be strong. She’s going to grow up understanding that strength comes from letting yourself feel for and connect with others. And that is a lesson some of us didn’t get to learn until much later in our lives. So thank you for being there to teach the next generation of girls that there are so many ways to be strong—and one of the most important ways is choosing to care when the world gives you so many reasons to be apathetic.

“I’m not giving you anything.”

That scene—with you asserting your agency and power as Kylo Ren tried to manipulate your mind into giving him what he wanted—has meaning for all women. It was a moment between a man who thought he could take whatever he wanted from a woman and a woman who didn’t let his manipulations control her. And not only did you say those powerful words, you followed through. You pushed back and found out you were stronger than his mind games. You bent but you didn’t break. And you emerged from that moment more powerful than anyone—including you—could have ever imagined.

You saved yourself, Rey. You serve as a strong example of a woman who can stand on her own two feet. But that doesn’t mean you always have to stand alone. Sometimes it feels as if women are told that the moment you reach out to another, your strength diminishes. But you made a habit of literally reaching out to others—first to Finn and then to Luke. And you and Leia both reached out to each other in your moment of grief, finding strength—not weakness—in that moment of support. It makes me so happy to know that girls will be able to see in you an example of a woman who is stronger because she reaches out to others—who is defined by her compassion as much as she’s defined by her skills with a lightsaber.

My cousin—the Luke to my Leia in our childhood Star Wars games—has a little girl now. She’s four years old. And I cannot wait for her to discover your story. I’m so excited for her to live out your adventures and to be the hero in her childhood games every time she pretends to be you. And someday, I hope to have a daughter of my own. When the time is right, I’ll pass the torch on to her the same way Leia passed it on to you with those simple words: “May the Force be with you.”

It’s a powerful thing to be able to give the next generation of nerdy girls a new chapter in a story that’s shaped so many of our lives. And it’s even more powerful to know that this new story will teach girls that they can be the main character in their story instead of a supporting character in a boy’s heroic journey.

On behalf of fangirls everywhere, thank you, Rey, for being a new hope for a new generation.

8 thoughts on “Stronger Than She Knows: A Letter to Rey”