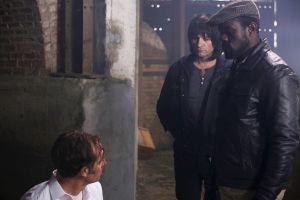 Episode M.V.P.: Matthew Rhys
One of the most underrated aspects of a great performance is how an actor reacts to what’s going on around them. Matthew Rhys isn’t a just a great actor; he’s a great reactor, and that is so important on a show that relies on subtlety and nuance as much as The Americans does. In “Divestment,” Philip was mainly reacting to the situations and people around him—from Reuben’s brutal way of killing to Martha’s living room interrogation. And the way those reactions built from silence to a powerful use of rhetoric allowed Rhys to use every weapon in his acting arsenal.

I loved what Rhys was able to do with silence once again in this episode. The set of his jaw and the direction of his gaze in the effective close-ups during the brutal fire scene said so much. And the stunning way he was shot in profile as he listened for news from Afghanistan allowed Rhys to show Philip’s overwhelming worry for his son without needing to spell it out for us. And his powerful silence in that scene made the revelation of his son’s name—his real name—feel as important as it needed to feel for Elizabeth’s request to be believable later in the episode. In just a few lines, Rhys and Keri Russell communicated so much to the audience and showed that Elizabeth and Philip can read each other’s reactions so well without any words.

That powerful silence between Elizabeth and Philip contrasted brilliantly with his final scene with Martha. While Elizabeth and Philip often don’t need any words to understand each other because they’ve built up so much trust together, “Clark” often needs to be a smooth-talker with Martha to keep her happy because that same intimacy isn’t there. As Martha finally confronted “Clark,” I loved that Rhys allowed us to see Philip panic for one barely perceptible moment. This was his worst nightmare coming true, and he needed to think on his feet to keep everything from crashing down around him. Rhys does such a brilliant job of showing the wheels turning in Philip’s head without making it seem obvious, and that was put to great use here, as we saw him grasping at straws to say everything he felt he needed to say to appease Martha and save them both.

What I loved most about Rhys’s work in that scene with Martha was that he was able to give just as much to the scene emotionally as Alison Wright was, which is no small task because Wright was incredible once again in this episode. And the emotion in that scene made me genuinely wonder how much of what he was saying was the truth. How much of it was “Clark” and how much was Philip? What were the truths, what were the half-truths, and what were the outright lies? We don’t really know, and I’m not sure Philip even really knows. If nothing else, I genuinely believed that he meant it when he said he would protect her. That could be the truth, or it could just be Philip being a phenomenal liar, which he was trained to be. Kudos to Rhys for making me question not just everything Philip said in that scene but also everything he felt, which we all know is far more important for these characters.

Favorite Scene: “Clark” and Martha in bed
The Americans is a show that has always preached that silence is often more telling than dialogue and sex isn’t always intimate. Those two themes came together brilliantly in the final moments of “Divestment,” as “Clark” and Martha were shown in bed together. This character pairing has often been defined by the role sex plays in their relationship; it’s what made Elizabeth jealous last season, after all. For the entire time Philip has been using Martha, sex has been the tool he’s wielded in order to pacify her when things start looking rocky. After this scene, though, it’s clear that the secrets and lies between them are something not even the Kama Sutra can fix.

I cannot stop thinking about Wright’s face as the camera closed in on Martha, her back turned so “Clark” couldn’t see her worried, heartbroken face. With one look, Wright conveyed the haunting idea that everything was changing for Martha and not even she knows how she’s going to handle it. There was also a sad amount of self-loathing in that look, too, and I could feel Martha berating herself for letting this happen to her, which broke my heart. Whatever happens with Martha, “Clark,” and the gun we all know she’s keeping in that dresser drawer, I know my heart is going to break for her, because this episode reminded me once again that Martha is one of the few innocent adults in this story—a woman who just wanted to be loved and now knows that her happy ending is nothing but a lie.

Philip’s expression was also so important in this final scene. It was a mirror of Martha’s in a way—looking up at the ceiling, staring into a future that’s more uncertain now than it was only a few hours before, not knowing how he’s going to handle it—or if he can handle it without hurting her any more than he already has. Everything has changed not just for Martha but for Philip, too.

Both characters may be physically in the same place, but there’s nothing close about them in that moment. The final shot—an overhead view of Philip on his back and Martha turned on her side with the sheets tangled around their naked bodies—was the most perfect symbol of their relationship imaginable. They’re in what should be an intimate setting after finishing what should be an intimate moment, but there’s no intimacy between them. There’s no openness, no honesty. They’re looking in different directions while being in the same place, which is a summation of their entire relationship.

That last shot is even more brilliant when contrasted with a particular shot near the end of last week’s episode: Philip and Elizabeth in bed together, holding each other and facing each other after she opened up to him about Paige and he opened up to her about his son. That was another moment of total intimacy for them—without sex. In that moment, Elizabeth and Philip were facing each other and holding onto each other in the middle of an uncertain future instead of facing different directions. The intimacy and honesty between Philip and Elizabeth has always contrasted to brilliantly with the lack of both of those things between “Clark” and Martha, and the comparison between those shots made that dichotomy clear in such a stunning visual way.

Extra Thoughts:
• If I could pick a second M.V.P. for this episode, it would be Wright. The way she was able to build the tension in Martha from the beginning to the end of the episode reminded me of the way Rhys is able to layer emotions throughout the course of an hour. Also, she excelled once again at making Martha’s emotions feel believable, reminding us that she’s one of the most relatable characters on this show. The moment when she tried to stop her hands from shaking after her interrogation felt heartbreakingly real.
• Speaking of Martha’s interrogation, I really enjoyed the way this episode flipped the interrogation scenes from the beginning to the end. Martha started the episode being interrogated, and Philip was part of a group of interrogators. But by the end of the episode, Martha was the one interrogating Philip.
• What does it say about me that I was haunted more by the episode’s last scene than I was by a person being burned alive? Then again, I think I’m just trying to block that burning scene out of my mind.
• Letting the student go was a surprising move, but I think it says a lot about Elizabeth’s changing viewpoint on young people in the world of espionage. I feel like the seeds are being planted now for her to start turning away from trying to recruit Paige, but I’m sure that storyline will ultimately play out in a way none of us saw coming.
• It was nice to see Nina again, and I loved seeing her face Vasili again. I also thought his line about her being at fault for deceiving him and him being at fault for believing her was a nice parallel to Philip and Martha.
• Just when I thought I couldn’t appreciate Arkady any more than I already do, he stood up to Oleg’s father and delivered some of the best deadpan humor used on this show in a long time. “So next time I’m home I won’t be able to ride the train…” I enjoy few characters on this show like I enjoy Arkady.
• Elizabeth going to Gabriel about Mischa was such a huge moment for her as a character. It was the first time we’ve ever seen her push the boundaries with a trusted superior, and it’s so important that she did it not just for Philip but for the son he had with another woman. And her voicing concern about Kimberly was the first time we’ve seen her question orders that aren’t life-and-death matters so directly. It was a moment where Elizabeth made Philip her priority, and I was proud of her for that.
• Frank Langella played Gabriel’s surprise that Philip told Elizabeth about Mischa with perfect subtlety. I think it’s interesting that the strength of Philip and Elizabeth’s partnership and the honesty between them is something that’s still being underestimated. I wonder how that deep sense of partnership is going to be used—both in their favor and to their detriment—as the rest of this season plays out.