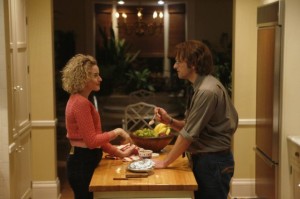 Episode M.V.P.: Matthew Rhys
“Salang Pass” was an episode that focused heavily on Philip and his many aliases. As such, it relied heavily on the versatility of Rhys. Like last week’s “Dimebag,” what made Rhys’s work so impressive in this episode was his ability to show the cracks in Philip’s exterior as both Clark and Jim in ways subtle enough for the audience to see them but to still make it believable that both Martha and Kimberly wouldn’t be able to notice something was amiss. For example, the scene with Martha where they were looking at potential foster children asked for such nuance from Rhys, as he had to show Clark still holding back from the idea while also showing Philip’s deep nostalgia for simpler times with this own kids just under the surface of his alias.

That same dichotomy between the persona Philip was projecting and his real emotions was never more evident than in the juxtaposition of his scenes with Paige and Kimberly. His shopping trip with Paige was filled with the kind of warmth and realistic fatherly behavior Rhys gives to every moment between Philip and his kids. And that same silly sense of humor and parental warmth worked its way into his final scene with Kimberly so perfectly that it took my breath away. As she talked on the back porch about the big rake and small rake, you could see the same pull between detachment and paternal nostalgia that he brought to Clark in the beginning of the episode. And when they had their food fight, Rhys made every beat feel like the kind of fun a dad would have with his kid rather than making it anything remotely sexual. That same sense of paternal care was brought to the heartbreaking moment of him carrying Kimberly up the stairs.

In the hands of a different actor, that whole sequence in Kimberly’s home could have been sexualized, making it difficult for us to ever root for Philip again. However, Rhys has done such a brilliant job showing that Philip’s natural instinct toward Kimberly is that of a protective father, which makes his interactions with both her and with Paige more fascinating than ever. And it makes it even more tragic to think about the possibility of him having to sleep with Kimberly, because we know that’s the one act he might never be forgive himself for committing.

Favorite Scene: “Do you have to make it real with me?”
If you want an example of just how good Rhys is—and how he and Keri Russell elevate each other’s great work to even greater heights—look no further than the final scene of “Salang Pass.” Rhys had to play so many layers in this scene: slightly stoned, deeply disturbed by what he might have to do, haunted by how he was trained to detach himself from sex in order to use it as a weapon—possibly against a young girl this time, exhausted by having to make it real with so many women for so many years, and deeply vulnerable with the one person he doesn’t always have to make it real with. And Russell, as always, was his equal, while being asked to do so much with just her eyes and her body language.

As the scene opened, I was struck once again by Elizabeth’s posture. Curled up on the chair, Russell was able to convey Elizabeth’s vulnerability before the character spoke one word. This wasn’t just about her husband being out on a mission—this was about her husband possibly sleeping with a young woman and needing to enjoy it enough to be able to go through with the act.

This conversation between Philip and Elizabeth about how he approaches the sexual aspect of his missions needed to happen and has needed to happen since the Clark incident in last season’s “Behind the Red Door.” Elizabeth is a woman who’s supremely confident in her abilities as a spy and is also generally confident about the fact that she and Philip have built something real together. However, the sexual part of his missions has bothered her for some time now, and I think it was because she didn’t know how he could do what needed to be done without some sense of pleasure. As she told him, she guessed it was different for a man. She could fake it without any of her marks ever knowing, but he couldn’t fake it in the same way. And we as an audience could sense the tinge of jealousy there, the wondering (especially with Martha and now Kimberly) if Philip actually liked sleeping with them.

Elizabeth was deeply scarred by her rape at the hands of her commanding officer. In her curt response to Philip’s question about thinking back on how they learned the art of using sex as a tool, we could see the woman who was traumatized by her sexual experiences in training. But what we saw in Philip’s flashbacks and in Rhys’s exhausted expression was that he didn’t escape unscathed. He was also traumatized by his sexual training, taught that his body was the property of the KGB—albeit in a different way than his wife, but a way that was also damaging. The way the flashbacks were presented with such cold lighting contrasted so well with the warm lighting in Philip and Elizabeth’s bedroom. In what should be a place of warmth, the cold, haunting past is still always present.

Philip was taught to make sex real for himself in whatever way he needed to in order to get through each mission. He was taught to lie not just to the people he was sleeping with but to himself in order to make it real. And for Elizabeth, that’s cause for relief and anxiety in the same breath. I loved the way she pressed him on both Martha and Kimberly, her insecurity so evident, adding such depth to her character. And finally, I loved the whispered way she asked if he had to make it real with her. It was the million-dollar question, and I loved how realistically scared she was to ask it.

Philip’s answer was at once heartbreaking and profoundly moving when you consider who these characters are. On a different show, he would have answered, “Never,” and we would have gotten a sweet, romantic moment. On The Americans, though, nothing is ever simple. So Philip told Elizabeth the truth. And the truth is, sometimes he has to make it real with her, but in that moment—with him gently stroking her face and looking at her with such sincerity—there was no need to make it real. That moment was as real as it gets. It was brutally honest, but it’s a truth I feel is applicable to all relationships. Sometimes we have days where we need to make it real, days where we need to fake it until we make it. And that’s especially true for a man and woman who have such a troubled history with physical intimacy.

The Americans has taken great pains to remind us there’s a difference between sex and intimacy, and this moment between Philip and Elizabeth may be the most intimate moment they’ve shared yet (even more than the tooth extraction because this moment demanded real vulnerability from both of them). The mere fact that Philip could admit to Elizabeth that he sometimes has to make it real with her is proof that it’s always more real with her than it is with anyone else. Elizabeth started the scene wondering if what they had was different, and this honesty—even when it’s painful—is what makes what they have different; it’s what makes it real more often than not. Honesty is hard and painful and makes you vulnerable, but it’s needed to make a marriage work. And even with all of the conflict over Paige this season, I’m so moved by the level of honesty these two characters—who lie to everyone else—have found with one another.

Extra Thoughts:
• The Americans is so good at casting wonderful young actresses to play teenage girls—first with Holly Taylor as Paige and now with Julia Garner as Kimberly. Garner lights up the screen when she’s on it, and her monologue about the big rake and small rake was phenomenal. It takes a great actor to pull the focus away from Rhys in a scene, but I found myself completely captivated by her work in this episode.
• I loved the sense that Kimberly’s speech about her father being gone hit Philip where it hurts because Paige could have delivered most of that speech, too. No, those two young girls aren’t exactly the same, but they want to feel like they matter—and they’ve turned to men who make them feel like they do (Kimberly with Jim and Paige with her pastor). It’s interesting to think that this mission could go either way with Philip and Paige: It could make him even more reluctant to bring her into an organization that uses teenage girls like this, or it could make him want to tell her truth because Kimberly is being kept in the dark by her father.
• The contrast between Elizabeth’s stone-cold killing of a man with his own car and her vulnerability with Philip in that final scene was a true testament to the fantastic nuances in both the writing and portrayal of this multifaceted female character.
• I love watching Stan and Oleg together, and nothing makes me smile while watching this show like Oleg trying to use his charm to get his way. Costa Ronin is so effortlessly charming that I could watch Oleg attempt to get information out of people all day.
• My second-favorite scene in the episode was the one in which Philip and Elizabeth talked about Paige and Henry growing up. It underscored so many of the episode’s themes: parenthood, nostalgia for simpler times with family members, and what makes a relationship real. Philip and Elizabeth’s role as parents has always been real to them—long before their marriage was—and that’s been both a help as they’ve navigated falling in love and a hindrance, especially now that they’re at such opposite ends of the debate over Paige’s future.