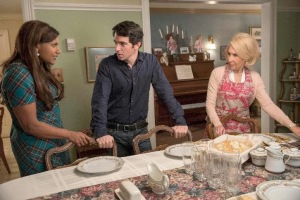 Title Dinner at the Castellanos

Two-Sentence Summary Mindy’s plans to tell Danny about her pregnancy are derailed by a visit from his father and half-sister, who’s become a “problem child.” Long-simmering tensions boil over at a family dinner at Annette’s, leading to important confrontations and revelations.

My Thoughts “Dinner at the Castellanos” was an episode about family. Specifically, it was an episode about the way we define who our family is. Is it the people we feel a sense of obligation to because of genetics, or is it simply the people we choose to love? We have the family we’re born into and the family we choose. And for Danny Castellano, there was always a line between those two families. However, Mindy Lahiri isn’t a character who respects lines and boundaries, and that led to an episode that did what the best episodes of The Mindy Project do: It took an honest look at a common relationship problem, and it ended on one hell of a high note.

This was the rare episode of The Mindy Project that was all A-plot, and I thought that was a very smart writing decision because it allowed the focus to remain tight on Mindy and Danny at such a major turning point in their story. The plot still allowed for some appearances by the supporting cast, with my favorite moments being another mention of how Morgan got his glasses (which still always manages to make me laugh) and a surprise appearance by Adam Pally as Peter, offering Mindy his typically crude but loving advice once again. (Family is like HPV, in case you didn’t know.)

The lack of distraction from Mindy and Danny’s storyline allowed the tension to build up without escape or release, which was exactly what needed to happen for the final minutes of the episode to resonate the way they did. And that tension built in different ways for the four most important characters in this storyline: Mindy, Danny, Annette, and Dot. (I’ll get to Dot’s underrated importance in this episode soon.)

Mindy’s internal conflict was clear from the start of the episode, when we learned her only negative pregnancy test result came from a popsicle stick she drew on (and then peed on): She’s pregnant but has no idea how Danny will handle the news. This is especially understandable given the way their last conversation went in “No More Mr. Noishe Guy.” They left each other on shaky ground. How do you then come back and say, “Hey honey, I know we’re in a weird place right now, but what do you think about adding a kid into this situation?” There’s no easy answer.

There were no easy answers for any character in this episode. Did Danny come off looking like a jerk for a big part of it? Yes. Did he have reasons for his behavior? Yes. Danny is one of the most realistically imperfect leading men in the history of the rom-com genre (in both TV and film). He’s infuriating at times, but that infuriating behavior is always grounded in very deep and very real emotions, which are brought to the surface with great honesty by Chris Messina.

Much of “Dinner at the Castellanos” revolved around Danny’s idea of family. To Danny, family means obligation, and that comes from a life spent trying to take care of the family his father abandoned. The reason he didn’t want Mindy at the family dinner wasn’t because he doesn’t love her; it was because he didn’t want to expose anyone to his messy family who didn’t have to be there. I can understand that mindset. There are parts of all our families that we want to hide from the people around us, even the people we share everything else with. Danny thought he was protecting Mindy, but he was actually making her feel more vulnerable than perhaps ever before. Mindy Kaling’s gentle hand on her stomach each time Danny made her feel like she wasn’t family was a poignant touch, a reminder that Danny’s intense focus on one part of his family was unknowingly causing him to reject a new part of his family.

The eponymous dinner at Annette Castellano’s home struck an effective balance between humor and honesty. I laughed hard at Rhea Perlman’s Stepford Wife persona (including that ridiculous blonde wig), and I found Mindy’s reaction to Little Dani’s slap genuinely funny, despite its inherent uncomfortableness.

While there were things to laugh about throughout this episode, it was a lot deeper than most half-hours of The Mindy Project. It killed me to watch Danny agree to take in his half-sister, alienating Mindy in the process. But it made sense. It hit on two deep issues for Danny: his desire to please and impress his father even after all these years and his obsessive need to take care of his family because he was forced into that role at a young age. The fact that his father knew he could prey on Danny’s caretaker instincts made me dislike Alan Castellano even more than I thought was possible.

There was real irony in the way Danny’s desire to take care of his family caused him to emotionally abandon the mother of the child he didn’t know he was going to have. In trying so hard not to be the man his father was, he—for one short moment—became that man. Thankfully, his mother did what mothers were put on this Earth to do: knock some sense into their kids when they’re being idiots. There was a very nice parallel to be made between Mindy and Annette in terms of their honesty in this episode. Neither was going to take anymore crap from people around them who were trying to get sympathy. Mindy’s direct approach to Little Dani was both funny (I loved that she wanted to try out for The New Mickey Mouse Club as a kid.) and revealing. We’ve been given hints for a long time that Mindy is good with teenage girls, which are often thought to be the toughest group to parent. She’s going to be a good mom, and her understanding but not tolerating Dani’s behavior was a well-timed reminder of that fact.

I’ve loved watching the relationship between Mindy and Annette develop this season because both are such strong women, and Kaling and Perlman are so great together. Therefore, I adored the fact that Annette was the one who discovered that Mindy was pregnant. It allowed for one of my new favorite moments between those two characters: when Annette gleefully hugged Mindy, telling her that it’s going to be terrible but she’s going to be a grandma. I initially thought some comedy might be mined from the very Catholic Annette finding out that her son and Mindy are having a baby out of wedlock, but this was so much better.

With this new knowledge, Annette found the strength to confront both her ex-husband and son for acting like idiots, and she had her best friend there to back her up. Dot was phenomenal in this episode. Hearing her tell Alan that she picked up the pieces after he left was such a lovely testament to the power and stability of female friendship. Dot is family to Annette because family is ultimately the people you care most about and would do anything—sacrifice anything—for. Dot is an example of the strength of the bonds of chosen family, and her place of importance in Annette’s life mirrored Mindy’s place of importance in Danny’s life. Neither Mindy nor Dot is a Castellano, but that doesn’t mean they can’t be family. Love and support are what makes a family, and Danny learned that lesson by the end of the episode.

There have been many great Messina facial expressions in this history of The Mindy Project, but they all now pale in comparison to his reaction to Annette telling him Mindy is pregnant. The way the realization reached his eyes just as “XO” by Beyonce started playing made me incredibly emotional. Messina conveyed so much in that one look: shock, hope, fear, and the painful understanding that he just committed the sins of his father by turning his back on Mindy when she most needed him to have her back.

As Danny left the house, not stopping to say goodbye, his desperation to see Mindy and fix the mess he’d made was made beautifully clear. Danny isn’t his father. He takes care of the people he loves. He makes mistakes, but he works hard to be better than those mistakes. And he loves Mindy so much; it was written all over his body language as he nervously fidgeted on the subway and bolted out of the doors once they opened. Bravo to Messina for being able to convey such a deep sense of purpose and love driving every step Danny took as he searched for Mindy. I could feel my heartbeat speeding up as he checked the apartments for the family he’d chosen.

It seemed fitting for him to find Mindy in the hospital break room, the place where we first watched them bond and then watched them nearly kiss at the end of Season One. The amount of tenderness, hope, and joy Messina and Kaling were able to project into those final moments was beautiful to watch, and combining that beautifully intimate final tableaux with such a memorable soundtrack made for a scene I don’t think I’ll ever tire of rewatching. It put some lovely happy tears in my eyes, which is all I could have asked for from such an important moment.