I apologize for the delay in getting this post up, but I hope all of you who celebrate it had a lovely Thanksgiving! 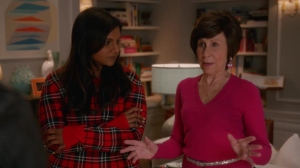 Title How to Lose a Mom in 10 Days

Two-Sentence Summary Mindy attempts to get Danny’s mom back into the dating game in order to get her to be a little less involved in Danny’s life. Her plan backfires, however, when Annette starts dating Morgan, who was dumped by Tamra.

Favorite Line “You’re a saint, Ma, and not the BS kind like Mother Teresa.” (Danny)

My Thoughts “How to Lose a Mom in 10 Days” was a good example of the way The Mindy Project can get away with even the most ridiculous plots because there’s always an undercurrent of sincerity in the show’s storytelling and acting. This episode’s plot—with Morgan dating Danny’s mom—seemed like a story straight out of “Absurd Sitcom Writing 101,” but somehow it worked. It was funny, it was sweet, and it was surprisingly emotional. In other words, it was a good example of what The Mindy Project does right.

I think a lot of opinions about “How to Lose a Mom in 10 Days” were made or broken based on what people think of Morgan as a character. Sometimes I struggle with him when he’s in his own plot, but when he’s integrated with the main cast—especially Danny—I love him. There’s something wonderfully comedic about the interplay of Ike Barinholtz and Chris Messina’s acting energies. It’s like watching a golden retriever try to show affection towards a grumpy cat that wants nothing to do with him. And that was used perfectly in this episode.

My favorite thing about Morgan is the way he is so unashamedly affectionate towards the people he works with. Morgan is someone looking for a sense of family, and this episode brought that part of him to the forefront. It was hilarious to watch him play catch with Danny and kiss him when Danny wanted to fight him, but it was also very sweet. Morgan genuinely cares about Danny, and, even though things thankfully didn’t continue with him and Annette, it gave us a nice little look into Morgan’s very big heart.

This episode also gave us a nice little look at who Annette Castellano really is and what she really wants out of life. While it was self-serving, I liked seeing Mindy set her up on a date with that nice older doctor. Like most things Mindy does, there was kindness to it underneath the initially selfish motives. I also thought it was nice to see her help Annette get dressed for her big date, despite Danny’s “Tart of Staten Island” overreactions.

Yes, part of this episode was designed to build a stronger foundation to Mindy and Annette’s relationship (which I love), but another part—and probably a more important part—of it was designed to go deeper into the relationship between Danny and his mom. Annette was a single mother, raising two young men who were abandoned by their father. It made perfect sense that she wanted to date but didn’t for the sake of her boys. And that had to be a difficult thing for her to admit to her son even now. But that scene between Rhea Perlman and Messina was probably the best scene in terms of pure emotion and depth so far this season. Perlman was so surprisingly vulnerable, and she was met every step of the way by Messina. Once again, no one does emotional reaction shots like him, and Danny’s love for his mother was written all over his face in that scene. Danny’s devotion to his mom is fun when it’s played for comedy, but it’s also incredibly emotionally powerful to see that kind of genuinely loving and appreciative relationship between an adult man and his mother on television.

The rest of the episode was pretty average, but an average episode of The Mindy Project is still plenty entertaining. There was some good Beverly stuff (the random corn shucking was fabulous), a nice helping of Dot, and just enough Jeremy to keep him from being grating. (Although I would have liked a little more Peter.) There were some more excellent Catholic jokes, and the wardrobe department outdid themselves once again with Mindy’s fabulous skirts. Finally, the Mindy/Danny stuff with the bath was a great example of the kinds of laughs that can only come from Mindy and Danny being in a relationship. It was all kind of awkward and all kinds of wonderful.