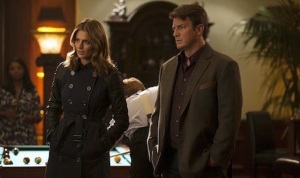 Two-Sentence Summary The murder of a pool shark and former MIT student by an unseen force leads Castle to theorize that the killer is the Invisible Man. As the team works to solve the case, Ryan tries to hide his second job as a bouncer at a male strip club and Castle and Beckett try to get romantic.

My Thoughts As much as it pains me to do this (because this was such a great episode), I’m afraid this will be a rather short review. Duty calls at the job that pays the bills, so I’m going to quickly share with you the three most important things I took away from “Clear and Present Danger.” I’ll hopefully be able to expound on these in more depth later tonight and into tomorrow as I respond to your comments, so please share all of your thoughts with me and feel free to discuss amongst yourselves this thoroughly entertaining episode.

1. This episode was smooth. “Clear and Present Danger” was a great transition episode from the darker and more mythology-heavy first two episodes of this season into the usual tone most Castle fans know and love. I know the new mystery of Castle’s disappearance is a divisive one (I happen to love it), but I think it’s safe to say that this episode did a nice job of reminding us that this new mythology exists but also allowing life to go on for us as viewers and for the characters, too. Castle’s disappearance was brought up in a surprising but realistic way (with the focus on how that disappearance has impacted their intimacy), which was a nice way to still include this new layer while opening the door for a little more lighthearted fun than the previous episodes allowed for.

2. This episode was funny. Kudos to Chad and Dara Creasey for getting the tone of this episode just right—it was “classic Castle” with a twist, feeling like something out of the show’s earlier seasons with the added bonus of Castle and Beckett being in a relationship and the show mining humor from that. It’s amazing that we’ve had seven seasons of Castle getting excited over ridiculous theories, and it still makes me laugh. It’s a testament to the childlike glee Nathan Fillion still brings to these moments after all this time, as well as a testament to Stana Katic’s reaction shots (which have developed from pure annoyance to playful affection). I laughed a lot during this episode, and it was nice to do that after a stretch of episodes going back to last season (as far back as “Veritas”) that were heavy on the angst and light on the comedy. From Ryan and his body glitter to Martha getting stuck in the “Invisible Man trap” and interrupting Castle and Beckett (which reminded me of “After the Storm” in the best way), the supporting cast really added to the humor in this episode. I spent the entire hour feeling thoroughly entertained, which was exactly how I wanted to end my long weekend.

3. This episode was sexy. Honestly, how long has it been since we could say that about an episode of Castle? I’m not one to gripe about how little time this couple spends kissing/doing more than kissing, because I think they have more than enough moments of emotional intimacy to keep me happy as a viewer (and admitted “shipper”). However, it is nice to have an episode that shows rather than tells us about this facet of their relationship. Using their impatience to rekindle their sex life as the lens through which we were reminded of Castle’s disappearance was perfect because it was believable. That first scene with them on the couch was wonderful because it made sense for them to be a little shy about moving too quickly physically after so much has changed, but once they were open with each other about what they wanted, there was no holding back. Sometimes the trope of the two of them getting interrupted can feel stale, but I found myself really loving it in this episode because Fillion and Katic sold the heck out of their frustration and the buildup of the tension between them. Watching Beckett and Castle clearly turn each other on while theory building was such a nice callback to the show’s earliest days, but it now had the extra layer of knowing that this tension could be resolved as long as they stopped getting interrupted.

And what kind of reviewer would I be if I didn’t talk about that bedroom scene? It was just frantic enough to feel believable for two people who have been away from each other for too long, and that made it even better. And, of course, no mention of the sexiness of this episode should pass without bringing up the ending. It was a lovely “show, don’t tell” moment made all the more wonderful by Fillion’s reaction shots. At the ripe old age of seven, Castle is still smooth, funny, and sexy, and I couldn’t ask for more as a fan than what we got in “Clear and Present Danger.”