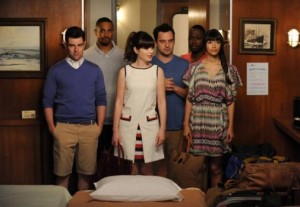 What Happens? When Nick and Jess can’t get a refund on the couples’ cruise they booked back when they were dating, they decide to bring all of their roommates along to keep things from being awkward. That plan falls apart when a day spent taking part in activities that were part of their “Grand Romance Package” leads to Nick trying to kiss Jess.

As Nick and Jess make the decision to abandon hopes of a friendship, Coach struggles with his fear of boats and water, and Cece keeps trying to get a signal to talk to her boyfriend. Schmidt initially plans to give Cece a class ring to celebrate her getting her GED (and to try to win her back), but Winston knows this is a bad idea and “accidentally” causes the ring to go overboard. With his grand gesture ruined, Schmidt takes a moment to see that Cece is really happy in her new relationship and decides not to pursue her now.

Winston and the rest of the group plan an intervention in their stateroom to help Nick and Jess accept that can still be friends. Although the intervention proves to be a success, the aftermath is not pretty; the group gets themselves locked in their stateroom for three days. When the cruise is over, Nick and Jess decide that they can still be friends, but one of them has to move out of their room. Schmidt comes up with a plan to solve everything: He and Nick can have bunk beds in his room like they did in their college days.

Game-Changing Moment Ever since Nick and Jess broke up, the loft and the show itself has felt stifled by the awkward situation of two people living in the same room after their relationship ended. By ending this finale with Nick deciding to move into Schmidt’s room, the show seemed to be setting up a fourth season that isn’t as heavy with awkwardness and angst as these last few episodes have been. The comedic potential of Nick and Schmidt sharing a room has already been shown in flashbacks to their college days, so this move will almost assuredly shake up the loft dynamics in a fun way next season. Also, the move seemed slightly meta to me, acknowledging the strange writing choice to keep them in the same room and admitting that it’s not working. By moving Nick out of the room, I’m hopeful that the writers will be moving away from having Nick and Jess’s storylines revolve only around each other. Was this game-changing moment a huge one? No, but does seem like an important step on the road to fixing the show after it got off the rails this season.

Finale M.V.P. For too long this season, the writers of this show seemed to forget what a gift they had with Max Greenfield. Yes, he can be funny, and no one plays a quirky little douchebag like he does. But his ability to bring genuine emotion to the table was often overlooked in favor of making Schmidt more cartoonish. The best episodes for Schmidt have always been ones that allow us to see that his douchebag exterior is really just that—an exterior, a façade. “Cruise” brought Schmidt’s humanity back in a really lovely, believable way. Yes, he was over-the-top at times (his moments with the violin player were just absurd enough to be hilarious), and he had plenty of funny moments (his distaste for nautical puns, his belief that rooming with Nick would be like college but “with way more sex”). But “Cruise” allowed Greenfield to put Schmidt’s heart on display for the first time in a long time. When he looked at Cece as she talked about really liking her new boyfriend, my heart broke for him. I believed he loved her, but I also believed that he cared about her enough to want her to find happiness with whoever she thinks will make her happy—even if that’s not him. That is a huge leap forward for Schmidt as a character, and I felt so proud that he had matured to that level. Greenfield made that development come across believably, and I was grateful for that little reminder of just how good he is as an actor—not just a comedic actor but an all-around actor.

Ultimately, “Cruise” didn’t feel much like a season finale. I don’t need finales to have game-changing moments after game-changing moments, but this one felt like a midseason episode; it didn’t make me desperate for next season to start. The fallout from Nick and Jess’s breakup has been difficult to watch for many reasons, but the biggest one is the way it has pulled focus from every other aspect of the show while not really advancing anything in terms of Nick and Jess as characters right now. If you’re going to spend multiple episodes wallowing in this breakup, at least use it to push these characters to new places so we can have hope that it wasn’t all for naught.

Nick and Jess’s breakup has drained a lot of comedy from the show. With so much time spent on their angst and stilted interactions, there isn’t as much time left for laughs. In “Cruise,” many of the moments that were supposed to be awkwardly funny just ended up being uncomfortable for me to watch (like Nick telling Jess he wants a refund). I think the fact that I still don’t believe in the “canonical” reasons for the breakup pulls me out of every scene Nick and Jess share. If you both genuinely enjoy spending time together, then why stay broken up when your reasoning was that all you do is fight? Watching the two of them take part in their “Grand Romance” activities only served to remind me how good these two characters were when the writers didn’t try to force angst on their relationship. I know that the argument can be made that those scenes showed that the fun dynamic can be recaptured with them as friends, but you can’t undo what’s been done. They were once a funny, compelling, and captivating romantic couple, and no amount of re-writing history to justify this breakup can change the fact that all of those awkward couple scenes would have been just as funny (and maybe even funnier) with them in a relationship.

It’s hard for me to watch Nick and Jess interact now. There’s comedy to be mined from awkwardness, but then there’s just discomfort. Sadly, that’s what I feel now between Jake Johnson and Zooey Deschanel. And that’s not making the best use of their talents. The writers seemed to want to break these characters up because too much of the show was becoming about their relationship, but now it seems that far too much of the show has been about their breakup. I watch New Girl because it used to make me happy, but nothing about Nick and Jess’s nonsensical breakup has made me happy.

“Cruise” was lacking a spark that a good season finale has, a reason to keep me excited for next season. Too much of the episode was devoted to Nick and Jess being awkward around each other, when the best thing about this show has become its supporting cast. Nick and Jess used to be the reason I tuned in, and now they’re the reason I lose interest in episodes. I know what this show can be when it’s at its best, so it’s difficult to watch episodes that are so much less than what this show can be.

What Worked I think the reason “Cruise” left me feeling disappointed was because it did have some moments I really enjoyed. As I said previously, I thought Max Greenfield was the best he’s been in a long time in this episode. And this was the first time in ages that I felt myself rooting for Schmidt and Cece to get back together someday in the future. The fact that he was willing to put her happiness above his own was a very mature move from a character that I’m not used to seeing make the mature move.

I also loved every little moment we spent with Winston and Coach. Coach’s fear of water was something I wish they’d done more with because the entire bit with him in the lifeboat was comedy gold. And Winston doing his weird exit from Schmidt’s room was the kind of strange humor only Lamorne Morris can pull off. My favorite thing about Winston in this episode, though, was that he got to be the voice of reason. I like when we get to see just how much he genuinely cares about his friends.

When “Cruise” was just letting its characters have fun, I was having fun. Even Nick and Jess had me smiling and laughing with their awkward photographs. And the intervention scene was the right mixture of silly and sincere that has drawn me to New Girl from the start. It was nice to see the whole group come together as friends and convince Nick and Jess that they can’t throw away their friendship. That’s the real heart of New Girl: the friendships. By focusing on the importance of friendships among the whole group in the episode’s final scenes, I was left hoping that maybe next season will find its footing by allowing all of the show’s friendships to take center stage instead of one particular relationship dominating the show (especially when it dominates it with angst).

Questions to Discuss All Summer Will Cece and Schmidt ever get back together? Can Nick and Jess really go back to being friends? How can next season fix what went wrong with this season?

Finale Grade C+. “Cruise” certainly wasn’t New Girl’s worst episode, but it was also far from its best. It was an average episode from a below-average season. I enjoyed all of the scenes with the supporting cast, but unless I can convince myself during the hiatus that there was a real, in-character reason within the show itself for Nick and Jess to break up, I think I’ll keep having trouble enjoying any of their scenes (which still seem to take up the majority of the show).

This last stretch of episodes isn’t enough to make me stop watching the show, but I think it is enough to make me stop writing about it every week. I apologize to those of you who read these reviews (and I want to thank you so much for your readership), but I’m just not having fun with them anymore. And I don’t think it’s productive for me to write about (or for you to read my reviews of) a show that I’m struggling to enjoy.