This week in television kicked off with another great episode of Once Upon a Time that brought some self-aware humor to balance out the show’s emotional storylines, as well as an episode of The Good Wife that flashed back to Alicia’s struggles before Will hired her at Lockhart/Gardner. Monday’s Castle reminded everyone that Castle and Beckett could never be boring, and Tuesday’s Brooklyn Nine-Nine gave us a jealous Jake and showed us why Amy’s dedication to dental health turned out to be her downfall. On Thursday, Once Upon a Time in Wonderland shocked everyone with the death of a major character, Ann had her baby on Parks and Recreation, Louis and Scottie squared off on Suits, and Scandal made everyone cry by revealing who was on the receiving end of the shot from last week’s cliffhanger.

There were some great moments for TV fans to experience this week—some depressing, some joyful. My favorite was a decidedly happy scene: Leslie visiting Ann in the hospital after little Oliver was born on this week’s episode of Parks and Rec. There was such a real sense of warmth, comfort, and familiarity in that scene. Sometimes it’s fun to watch huge plot twists unfold, and sometimes it’s incredible to watch brutally emotional moments. But often, I’m drawn to the simple moments between characters who love each other. Leslie and Ann curled up on a hospital bed—talking about TV and using that to talk about what makes each friendship in our lives special—was one of those simple, beautiful moments. The fact that it was between two female friends was the icing on a warm and wonderful cake. 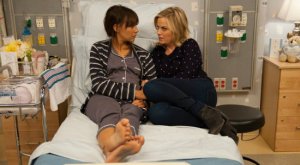 What was the best thing you saw on TV this week?