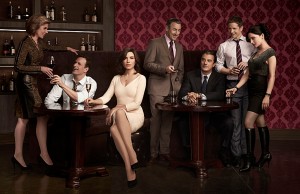 2013 was the year The Good Wife reminded us how good network dramas could be.

It’s time for the conclusion to my look at the best of the television world in 2013. There were plenty of memorable episodes that aired this year that people will be talking about for a long time—episodes that made us laugh, sob, and stay up way too late thinking about them. And whether you’re a one-episode-a-week viewer or a binge-watcher, there’s no denying that 2013 was a year where many great shows hit new heights of excellence.

1. “Hitting the Fan” (The Good Wife)
It’s not often that a show manages to reinvent itself in its fifth season, but that’s exactly what The Good Wife did with this incredible episode. Tensions that had been building for five seasons found release in explosive scenes (Will and Alicia’s confrontation) as well as more controlled moments (Peter and Will’s phone call). Each member of this great cast brought their A-game to this episode, and their excellent performances were heightened by the expert pacing of this episode. “Hitting the Fan” was a bold move and a brave one, and it paid off tremendously for all involved, especially the audience.

2. “The Rains of Castamere” (Game of Thrones)
This episode will always be known by its more colorful moniker, the Red Wedding. The entire hour was a masterpiece of tension and foreboding, keeping audiences on the edges of their seats until the bloodbath began (which was when they moved from the edges of their seats to hiding behind their fingers). The brutal carnage still managed to surprise even those of us who read the books, but my lasting impression of this scene was not one of surprise; it was one of despair. Michelle Fairley made me physically feel Catelyn’s grief and desperation with a ferocity I’ve never experienced as a TV viewer before. This episode was raw and ruthless in its assault on my senses and emotions, and that’s exactly what it was supposed to be.

3. “Ariel” (Once Upon a Time)
“Ariel” represents what Once Upon a Time is at its best. It featured a faithful spin on a beloved fairytale (in this case, The Little Mermaid) with some fun twists (aka Lana Parrilla getting to channel Ursula); some delicious banter between Parrilla and Robert Carlyle; and some very human drama in the middle of a world of fairytales. Colin O’Donoghue, Ginnifer Goodwin, Josh Dallas, and Jennifer Morrison were at their very best as their characters shared their darkest secrets with one another in the Echo Cave. Each secret’s emotional impact was earned—from the beautiful (Hook’s admission that Emma gave him the hope that he could move on from his past) to the bittersweet (Snow wanting a new baby because her relationship with Emma isn’t what she wanted) to the painful (Emma telling Neal that she wished he was dead so she could finally move on). “Ariel” was a shining example of the emotional power of a television show that’s never been afraid to wear its heart on its sleeve.

4. “The Quarterback” (Glee)
This episode was a respectful, beautiful, and honest way to tell a story no cast should ever have to tell: the death of a friend who left this world far too soon. The emotions ran raw and real—almost intrusively so at times—but “The Quarterback” allowed Glee fans and the cast to mourn together. From the brutally sad moment when Finn’s mother broke down while cleaning out his room to Lea Michele’s devastating rendition of “Make You Feel My Love,” this episode allowed the people who knew Cory Monteith best to share their grief with the fans who loved him, too.

5. “Variations Under Domestication” (Orphan Black)
Great television is all about pacing—finding a balance between tension and release, drama and comedy, emotion and action. “Variations Under Domestication” struck a genius balance between all of those facets as well as between all of the increasingly complicated roles Tatiana Maslany was asked to play. Between all of the twists and turns in this episode (and there were plenty of great ones), I found myself invested in the emotional lives of Cosima and Alison more than ever before. I would have paid to watch a film-length version of this episode in a movie theater—that’s how entertaining it was.

1. “Leslie and Ben” (Parks and Recreation)
“Leslie and Ben” featured great performances from three of my favorite comedic actresses and two of my favorite comedic actors of 2013, and it featured my single favorite TV moment of the year. Therefore, it should surprise no one that it was my favorite episode of television to air in 2013. This episode hit both the funny bone and the heart with perfect precision. I love crying because I’m happy, and no other episode of television this year produced the sheer volume of happy tears that this episode produced. It included so many excellent callbacks to this show’s wonderful history, and it gave each character at least one moment for their individual highlight reels. Whenever I needed a dose of instant happiness this year, this is the episode that I reached for.

2. “Cooler” (New Girl)
Even without the truly epic kiss that ended the episode, “Cooler” would have still been one of the great comedic episodes of 2013. It put Nick in a woman’s trench coat, reminded us all why True American is the greatest made-up game in the history of television, and even gave Winston his own story! But when all is said and done, “Cooler” will be remembered as the episode that changed the makeup of New Girl forever by bringing Nick and Jess together with one heck of a kiss. It was brave, it was surprising, and it was one of the hottest TV moments of 2013.

3. “Finale” (The Office)
A series finale should do a few things—it should cause you to fondly remember the best things about a show, it should put a smile on your face, and it should bring tears to your eyes. “Finale” did all of those things, and it did them with a sincerity that blindsided me. From the much-anticipated return of Michael Scott to the pitch-perfect writing in the show’s final moments, everything from Dwight and Angela’s wedding until the end of the episode was as close to perfect as I could have hoped for as someone who has loved this show for years.

4. “Christmas Party Sex Trap” (The Mindy Project)
The Mindy Project is all about the disasters and the pleasant surprises that can happen when our elaborate plans for romance go awry, and this episode reflected that concept in a smart, utterly satisfying way. This episode succeeded because its quirky details were just quirky enough to be memorable—from Danny’s gingerbread Monticello to Mindy’s wine bra. And if an episode is only as good as its best moment, then Danny’s Secret Santa dance for Mindy automatically skyrocketed this episode into contention for one of the best of the year.

5. “Two Parties” (Parks and Recreation)
“Two Parties” highlighted what makes Parks and Recreation such a special show: its rich cast of supporting characters, its attention to detail, and its warm heart. While Leslie’s bachelorette party going awry was a fun storyline, what made this episode so memorable was Ben’s bachelor party, which turned into a bachelor party for all of the male characters in the cast. The way each bachelor party so perfectly reflected each character was genius, and the sense of camaraderie and friendship in that storyline made me smile like nothing else on TV this year.

1. The Good Wife
A fifth-season reinvention has done wonders for this show, elevating the performances of its stellar cast and heightening the tensions—both personal and professional—that make this show such a compelling drama. Who says there are no good dramas left on network TV? In my eyes, CBS is home to the smartest drama with the most talented core ensemble on television.

2. Parks and Recreation
Sometimes you just want to feel good when you watch TV, and, there’s no other show that warms my heart as honestly as Parks and Recreation. With an ensemble that seems to only get better every season, this show continues to prove that you don’t have to be mean or dark to be hilarious.

3. Game of Thrones
Dracarys. The bath scene. The Red Wedding. 2013 brought with it a host of memorable moments for the most cinematic show on television. Anchored by incredible work from a stellar cast, Season Three of Game of Thrones was a season people still haven’t stopped talking about, punctuated by moments that stand on their own not just in the show’s mythology but in the pop culture lexicon of 2013.

4. Once Upon a Time
After a slow start to 2013, Once Upon a Time kicked into a new gear of character-driven drama with the start of Season Three’s Neverland arc. Shocking revelations, strong new characters, and ever-shifting dynamics made 2013 lots of fun for fans of this show, but it’s the emotional moments between the characters and a strong focus on all kinds of rich relationships—not just romantic ones—that take Once Upon a Time from escapist entertainment to captivating dramatic television.

5. New Girl
New Girl makes my list on the strength of the second half of its second season, which was the single best run of episodes I saw all year. It may have faltered a little since then, but there is no denying that the string of episodes from “Cooler” to “Elaine’s Big Day” achieved a kind of continuous excellence many sitcoms could only dream of. From Elvis-themed funerals and ruined weddings to the return of True American and the best kisses I saw on TV all year, New Girl was full of surprises in 2013—and what pleasant surprises they often were.

Which episodes and TV shows were your favorites of 2013?