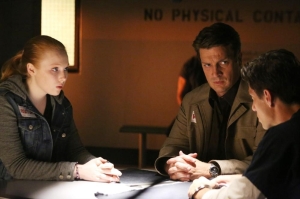 Two-Sentence Summary Despite their strained relationship, Alexis goes to Castle for help when her professor introduces her to a man on death row for a crime he didn’t commit. With only a few days before his execution, father and daughter must work together (along with some help from the 12th precinct team) to prove the man’s innocence and find the real killer.

Favorite Lines
Beckett: Yes, because when I was a little girl imagining my wedding day, being stuck in a small tin can with a thousands tons of rocket fuel strapped to my ass was exactly what I had in mind.
Castle: Then we agree!

My Thoughts I’m often torn when it comes to any question about whether the ends justify the means. That’s how I feel about this “Alexis arc” (or Pi-gate, as I call it in my head). “Like Father, Like Daughter” was an interesting Castle episode that featured an excellent ending, but I’m not sure it was worth all of the father-daughter angst that came before it. Surprisingly, the relationship I cared about most in this episode was the one we only got a brief glimpse of at the end. Because, while it may have been called “Like Father, Like Daughter,” this episode did an excellent job of showing me all the ways Beckett and Alexis are alike.

Sometimes I like when Castle deviates from its normal procedural format, and sometimes I don’t. This time, I was firmly in the middle of those two opinions; I liked the change of pace, but, after the D.C. arc kept us out of the precinct for a while, I still missed having everyone working at the 12th together. However, it was nice to see them all banding together to help Alexis—because she really is part of their precinct family. I especially loved the way this episode reminded us of her relationship with Lanie and her time spent working at the precinct.

My only nagging problem with the involvement of everyone at the precinct is this: Was it a slow few days at the 12th? How was Captain Gates okay with her top homicide detectives spending so much time working on a cold case that wasn’t theirs? But I suppose that’s what suspension of disbelief is all about.

The case itself moved along at a good pace, and I definitely didn’t see the last few twists coming. I wished we could have seen more of Alexis’s work on this case or similar cases before this episode, but a thirst for the true story is in her DNA. So even though her passion for this case seemed to come out of nowhere, it was grounded in some very traceable character traits. It also allowed Molly Quinn to break out of the passive-aggressive mold she’s been stuck in for the last few episodes and remind us that she can sell Alexis’s interesting brand of maturity and naiveté like nobody else could.

My biggest problem with the episode was how long it took Alexis to stop being passive-aggressive (or just outright aggressive) towards her dad. First of all, Alexis (yes, I do sometimes talk to fictional characters), you don’t ask anyone—especially your father—for help by prefacing it with “I’m still mad at you.” That’s not going to get you anywhere, and you’re lucky you have a father as devoted to you as he is; most would not be so willing to bend over backwards for a daughter who is just using them for their connections to the police and their ability to solve impossible cases. And also, Alexis, didn’t you specifically state that you wanted your father to really make an effort to get to know Pi? Isn’t that why you were mad in the first place? Then why for the love of all that is good did you completely shut down his sincere attempt to ask you about your boyfriend? I understand being upset and wanting to stay upset because it’s easier to hold a grudge, especially with a parent. I understand being irrational at times; it’s part of being human. But that “don’t try to bond with me” scene was infuriating.

My frustration with Alexis reached its peak when she went into the possible suspect’s house despite Castle’s obvious concern. I know that the whole point of the episode was to mirror Alexis’s relentless quest for justice with the way Beckett functions, but when Beckett risks her own safety for a case despite Castle’s wishes, it’s often for her mom’s case, which we have an emotional connection to. We didn’t have that with Alexis and this case, so she came off as unnecessarily harsh towards the father who had to fight to get her back from being kidnapped less than a year before. I couldn’t believe that never came up during that conversation in the car—did the writers forget that happened? It would have made for a very compelling moment with Castle telling her he couldn’t risk losing her again. And how is Alexis not the least bit afraid after the ordeal she went through in Paris? I know she’s a brave girl, but for her to be indignant towards Castle about his very understandable fears was too unrealistic for my liking, especially considering her abduction last season.

I know it sounds like I didn’t like Alexis in this episode, but, by the end of it, I found myself warming to her once again. I loved her hug with Castle at the end, and I hope it was a sign of better days to come for their relationship (although as long as Pi is around I doubt it will be smooth sailing). But what really touched me in this episode was the moment we were given between Alexis and Beckett at the end. I wish we could have seen their whole conversation, but I think the subtlety of the moment worked well. It doesn’t matter what they talked about; what matters is they talked, and they shared something together that not even Castle is a part of. Like Lanie told Beckett, they’re making their own history.

That moment between the two best friends in the morgue was a great one, and it was one of the reasons why I think Lanie is such a vital part of this cast of characters. Beckett needs a friend—an honest, straight-shooting, advice-giving friend. And that’s exactly what Lanie is. I loved that Beckett had someone to open up to about her fears of never fitting into Castle’s life with Alexis because it’s a very real fear for a woman marrying a man with a grown child. And Lanie was right; it’s Beckett’s job to stop worrying about Castle and Alexis’s history without her (which will always be there, as it should be) and to start making her own history with them.

This episode was designed to show us just how strong a history that could grow to be someday. Castle and Beckett’s wedding planning scene was adorable (and so in-character), and it was a subtle way to remind us that a big part of the tension between Alexis and her father is this engagement that she felt left out of. What is a source of happiness for Beckett and Castle is a source of skepticism and latent hurt for Alexis.

But the end of this episode proved to me that these two women will be the ones to turn this engagement and wedding into something that brings them together rather than driving them apart. And it’s because they’re both kindred spirits. Alexis’s mother was hardly ever around, and when she was it was as a friend rather than a mother. Even with Gina, Castle kept Alexis separate from his marriage. And Beckett lost her mother just as she was growing into womanhood. Both of these women were shaped by the absence of their mothers. It may be more obvious in Beckett’s case, but Alexis has certainly been affected by Meredith’s inability to maintain a real presence in her life.

“Like Father, Like Daughter” did an excellent job of showing us just how extraordinarily similar both of these women can be. Beckett is serious, smart, and passionate—just like Alexis. And this episode proved that Alexis can be just as driven to get justice as Beckett can be. In fact, I’d be interested to see Alexis go into a legal career, to take the path Beckett was on before her mother’s death.

It put a huge smile on my face to see Castle watching the two most important women in his life hug at the end of the episode. More than anyone, he can see all the ways they’re similar and all the ways their budding relationship can help both of them grow as women. For a man who was so unwilling to open up his relationship with Alexis to Gina, Castle seemed at peace and content with the idea of the two loves of his life sharing a moment that he didn’t need to be a part of. If that’s not a sign of character growth for all involved, then I don’t know what is. And any episode that ends with such significant character growth is a good one in my book.