For years, I thought of the summer television landscape as the realm of reality TV and reruns. And then I discovered Suits. Don’t let its home on USA or its schedule (half of a season in the summer, half beginning in the winter) fool you: This is one of the best shows on television no matter where or when it’s airing. Suits is smart, stylish, sexy, and sophisticated—and it’s a show everyone should be watching.

With only three episodes left before its midseason finale, here are 10 reasons you should be turning the channel to USA on Tuesday nights at 10 p.m. for an hour with the most entertaining law firm on television.

10. It’ll help you through your Game of Thrones withdrawal. 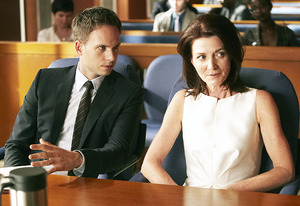 Last season, GoT’s Varys (Conleth Hill) joined the cast of Suits as Edward Darby, a British attorney who merged his law firm with Jessica Pearson’s (Gina Torres), adding new tension to a show already full of interesting dynamics. This season, you can get your Catelyn Stark fix after the horrors of the Red Wedding by tuning in to watch Michelle Fairley play an oil magnate accused of murder with her trademark sense of controlled emotional power. And it’s not just the cast that will remind you of Westeros. Suits is a show full of enough backstabbing, power plays, and manipulation (from both the male and female characters) to make Littlefinger proud.

9. It has one of best supporting characters on any TV drama right now. 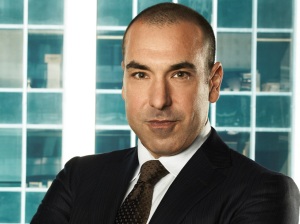 The character of Louis Litt (Rick Hoffman) began as a foil for main character Harvey Specter (Gabriel Macht). He was angry and awkward, with little to do in terms of character development at first. But somewhere along the way, the writers seemed to realize what a gift they were given with Hoffman, and Louis became one of the best things about Suits. The man who was once one-dimensional has grown into an incredibly multifaceted character. He loves the ballet, has a way with cats, and genuinely cares about the people he works with. The character who began as someone we wanted to root against has become one of the easiest character on the show to root for, and he has also become a fantastic source of comedic relief. Whether he’s fighting for custody of a cat or bathing in mud, Hoffman makes even the most ridiculous storylines work because he makes us care about Louis in a way we never thought we could.

8. The pop culture references are fast and furious.
The writing on Suits is incredibly smart and quick. One of the most enjoyable things to do during each episode is to spot the numerous pop culture references in the dialogue. This season alone has had references to Dead Poets Society, Butch Cassidy and the Sundance Kid, Pulp Fiction, and many, many more. For a pop culture junkie like myself, there’s nothing more fun than watching characters talk the way I talk—with a lot of movie quotes, comparisons to fictional characters, and even some really bad Sean Connery impressions.

Everything you need to know about the look and feel of Suits can be found in its fantastic opening title sequence. Its cinematography is sleek. Its soundtrack is smooth. And its costuming (especially the titular suits worn by Macht and Patrick J. Adams) is sexy without trying to be (which we all know is the best kind of sexy). Suits is one of those rare shows that has had a very defined style from the first episode—and that style can be summed up in one word: cool. 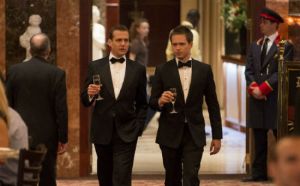 At its core, Suits is a show about the relationship between two lawyers: Harvey Specter and Mike Ross (Adams). From the pilot, the trust between them is what propelled the plot forward and added a unique emotional depth to what could have been a generic legal procedural. Harvey keeps Mike’s secret (he never actually went to law school—or finished college, for that matter) because he believes in Mike and comes to care about his protégée, and Mike has an unshakeable faith in Harvey grounded in immense respect for his mentor. Their work relationship has developed into one of television’s most believable bromances, complete with fun banter and a deep sense of loyalty on both sides.

5. Have you seen this cast? 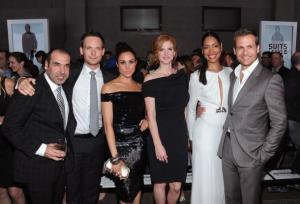 Are you in the mood for an hour’s worth of eye candy every week? Then you’ve found the right show. Suits has one of the most beautiful casts on television, and they’re always dressed to impress (see Point #7 on this list). These actors are mature, classy, and gorgeous beyond just their pretty faces—they each exude a kind of confidence that makes every scene a work of art. And have I mentioned the way Macht looks in Tom Ford?

4. The women are busy being awesome.

Jessica Pearson is the head of the most prestigious law firm in New York City. Donna Paulsen (Sarah Rafferty) is so much more than a legal secretary—she’s the best legal secretary imaginable, she’s a trusted member of the inner circle of that prestigious law firm, and she’s the only person in the world Harvey Specter would ever admit to needing. And Rachel Zane (Meghan Markle) has grown from a paralegal with crippling test anxiety to a woman who just got accepted into Columbia Law School and has proven herself more capable as a lawyer than the majority of the firm’s associates. The women of Suits are smart, powerful, and complex. They also have flaws, quirks, and vulnerabilities that make them feel real, interesting, and relatable.

3. Nothing is ever simple.
The cases on Suits are morally complex, and so are the characters. No character is perfect, but their flaws, mistakes, and misjudgments make them interesting. Characters who could seem like stereotypes are actually so much more. Take Harvey for example: On another show, he would be the antagonist, the successful jerk we’re supposed to root against. But on Suits, we root for Harvey because we know his story and we see the humanity behind his “cool closer” façade. Suits is a show that surprises you with thoughtful twists and turns in both its plot (the latest involving Stephen Huntley, the “British Harvey”) and its character development (Harvey and Donna’s past in “The Other Time”).

2. You will fall in love with Harvey and Donna’s relationship. 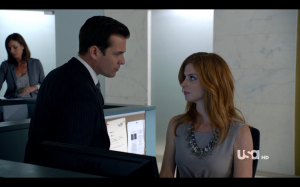 Within the last year, all of my favorite TV couples have answered the “Will they or won’t they?” question with a resounding “they will”: Castle and Beckett are in a relationship heading towards an engagement; Ben and Leslie got married; and Nick and Jess are on the road to a relationship (a road filled with a lot of kissing). Thankfully, my need to scream “JUST KISS ALREADY!” at the TV has been more than met by Donna and Harvey on Suits. Macht and Rafferty have the kind of chemistry where it isn’t cliché to say they can communicate with just a look; it’s the truth. There’s such a sense of shared history between these two characters, and so much of that comes from the shared history between these actors (who’ve been friends for 20 years). They are the most important people in each other’s lives, but they chose a professional relationship over a romantic one, after giving in to their delicious sexual tension 10 years ago. They may have walked away from romance, but there’s no denying that there’s something that exists between them on a far deeper level than just a work friendship. They are each other’s constant, each other’s protector, and each other’s soul mate (whether you believe it’s on a platonic or romantic level is up to you). Harvey and Donna are a partnership—they make each other their best selves, and they know that. Now all that’s left is watching these two finally admit what they wanted to admit 10 years ago: They belong together in a lot more places than just the office.

1. The characters and relationships are ones you care about. 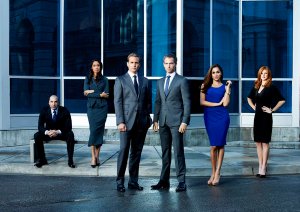 Suits is a show populated by characters that have been created and developed with care. Every combination of actors on this show produces dynamite scenes. I laugh every time Donna and Rachel gossip together. I cheer every time Harvey stands up for Mike (and vice versa). I feel all warm and fuzzy inside whenever someone is genuinely nice to Louis. I smile whenever Harvey and Jessica strategize together. And I melt every time Donna and Harvey fight for each other. I love television shows that make me feel and make me think, and that’s Suits in a nutshell. You come to the show for its smart writing and charming cast; you stay because that cast makes you feel invested in every character’s journey.

30 thoughts on “10 Reasons Why You Should Be Watching Suits”