I’m a Star Wars nerd. I’ve watched the original trilogy more times than I can count. I own an encyclopedia of characters and multiple Expanded Universe novels. I’ve idolized Princess Leia since I was a little girl. And I freaked out when I discovered my family’s trip to Disney World was going to coincide with the annual Star Wars Weekends held at Hollywood Studios.

Star Wars has been a part of my life for almost 20 years. It was my first real foray into fandom, my first real taste of the nerdy life I so proudly live today. There’s something special about your first love, and that’s what Star Wars was for me. From pretending to be Princess Leia on the playground with my cousins as a kid to writing about its mythology as a college student, Star Wars has always had a presence in my life—and I hope it always will.

To celebrate my Star Wars Weekend adventures (and because it’s never a bad time to talk about Han Solo), I thought it would be fun to rank the six Star Wars films from worst to best.

6. Episode I: The Phantom Menace (1999)
Yes, there are some really cool things about this movie. As an original trilogy fan, it was fascinating to watch Palpatine’s rise and to see a younger Yoda on the Jedi Council. Darth Maul and his double-sided lightsaber are the epitome of badass. And any movie featuring both Samuel L. Jackson, Liam Neeson, and Ewan McGregor as Jedi Knights can’t be a total loss. However, this movie takes those strong points and dilutes them with a story that’s incredibly boring. Who cares about the Trade Federation? (Answer: NO ONE) It also takes one of the great mysteries of the Star Wars universe (the Force) and turns it into something that can be analyzed in blood tests (and can apparently impregnate women—or at least Anakin’s mom—in the most ridiculous “WTF?!” moment in the whole series). Finally, no mention of The Phantom Menace is complete without a mention of its enduring legacy: Jar Jar Binks. Meesa wishing he was never created. 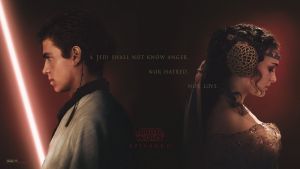 5. Episode II: Attack of the Clones (2002)
Episode II beats out Episode I for me simply because Jar Jar’s presence is vastly reduced. Also, the lightsaber battle between Yoda and Count Dooku at the end of the movie made everyone’s favorite miniature Jedi Master even cooler. The introduction of Jango Fett and his son Boba is another strong moment in this film. However, no amount of Fetts could make up for Hayden Christensen and Natalie Portman’s wooden acting, which made the painful dialogue in the “forbidden love” parts of this movie even worse. I’ll admit to having a huge crush on Christensen when I was a freshman in high school, but even back then I found the love story between Anakin and Padmé to be lacking the intensity needed to make me believe this love was worth Anakin turning away from his Jedi vows. What should have been a tragic, epic love story felt cliché and forced, which was a huge disappointment.

4. Episode III: Revenge of the Sith (2005)
This film is by far the best of the prequel trilogy, but it still has more than a few faults. While its mythology is well-developed and impressively connected to the original trilogy (I especially love Obi Wan delivering Luke to his family on Tatooine), there are still some pretty major continuity errors to be found. The most glaring of these errors is Padmé’s death. In Return of the Jedi, Leia has distinct memories of her mother but states that she died when she was very young. In this film, Padmé dies in childbirth, which completely contradicts what Leia said. Padmé’s death poses other problems, too, such as the ridiculous notion of her dying simply because she lost the will to live. Her despair also brings out some of Portman’s most laughable bits of overacting (“Anakin, you’re breaking my heart!”). However, for as cheesy as some of the dialogue is (especially Darth Vader’s reaction to Padmé’s death), there are some truly impressive moments of pathos and depth to be found in this film, especially from McGregor. The final lightsaber battle between Obi Wan and Anakin is just as epic as I’d always hoped it would be, and that alone is enough to make it the best of the newest films.

3. Episode VI: Return of the Jedi (1983)
This was my favorite Star Wars film for a long time, and I still consider it one of my favorite movies. It may not have the high drama of The Empire Strikes Back or the wide-eyed wonder of A New Hope, but it’s a lot of fun—and sometimes that’s all you’re looking for from a sci-fi film. From the opening action sequence on Tatooine to the final destruction of the second Death Star, this movie is filled with adrenaline-packed scenes, but those scenes are balanced by some strong moments of character development, especially with Luke’s journey and Anakin’s ultimate redemption. And yes, the reveal of Luke and Leia as siblings may have come out of leftfield, but the scene where Leia reveals that to Han will always be one of my favorites. In fact, the relationship between Leia and Han is one of the best things about this movie because they are connected not only as lovers but as equals throughout it. This was a great film to bring the original trilogy to a fulfilling and entertaining end.

2. Episode IV: A New Hope (1977)
A New Hope is one of those movies that I’m sad I will never get to experience the same way people did when it was first released. Sometimes I forget just how groundbreaking this film really was, but then I think about it and am floored at the creative genius of George Lucas. He was able to take a story that’s been told in everything from Greek myths to Westerns and transform it into something completely new and exciting. The special effects were incredible for their time, but what will always remain when I think about A New Hope are the characters: the wisdom of Obi Wan, the menace of Darth Vader, the easy charm of Han Solo, the strength and sass of Princess Leia, and the innocence of Luke Skywalker. The image of Luke watching the twin suns of Tatooine set, dreaming of a more adventurous life, is one of the most enduring cinematic images I’ve ever seen. A New Hope is a big film that manages to get even the smallest moments right, and that’s what makes it a classic.

1. Episode V: The Empire Strikes Back (1980)
The Empire Strikes Back has been one of my favorite movies since I was 12 years old—not just one of my favorite Star Wars movies; one of my favorites in any genre. When it became my favorite over Return of the Jedi, I felt like I had grown up in a big way; this is by far the most mature and nuanced Star Wars movie. The drama in this film never feels forced; it’s tragic but beautifully so. Everything about this movie is gorgeous—the cinematography, the score, the lighting, Harrison Ford…It feels like a drama that just so happens to be set in a galaxy far, far away rather than a traditional sci-fi film. It has moments of comedy (anything involving the droids or Han and Leia’s banter), action (the battle on Hoth), romance (Ford and Carrie Fisher’s chemistry was off the charts in this film), and even spirituality (Luke’s entire time on Dagobah). Plus, it has one of the greatest twists in movie history as well as the single greatest response to “I love you” ever given. This may not be a perfect film, but it’s as close as the Star Wars franchise has ever come.

How would you rank the Star Wars movies?